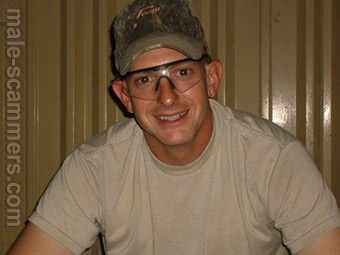 REPORT N1 (added on October, 24, 2013)
Dragana (Serbia)
Alex Hopkins asked me to be his Facebook friend and we started a conversation on fb on 8 July 2013. He kept sending me messages on fb that soon became love messages. I explained that I was 56, divorced and much older than him judging by the photographs, but he said it did not matter. He said he works for the US Military and that he is a major, currently on the mission. On his fb profile it was stated that he was located in Syria which was a bit fishy because as far as I know the US army is not in Syria.
Alex said his wife and his parents got killed in a car accident 7 years ago and that he had 1 daughter, aged 16, who lives in London. He wanted me to become a fb friend with his daughter, Lynna Hopkins, which I did. Her profile looked completely fake because it had very little info and no friends. Still, I wrote messages both to Alex and to Lynna. I didn't want to believe that their profiles are fake.
On 21 October 2013 Alex asked me for my phone number and said he would phone me. He said that he instructed his daughter to buy him a 600-pound phone card so that he could phone me. He also asked me for my email address which I gave him. Today he sent me an email. It was written so perfectly that I checked it on Google and than realized that it was copied almost word by word from stopscammers.com. I discovered this scammer in good time! But my heart is broken.

Romance scam letter(s) from Alex Hopkins to Dragana (Serbia)
Dear Dragana,
Ever since you walked into my life I have been smiling. There hasn't been a night when I have gone to sleep with a frown on my face, and it's all because of you.
Honey, I am glad that you came into my life. I have always wanted the love of my life to be understanding, loving, caring, and faithful. I wanted someone who would accept me for who I am. I know that I’ve found that person in you. My heart told me that my princess was there when I first said hello to you over the Facebook. I didn't have to think twice when I asked you to be my friend. I knew that you were the perfect match for me. I don't think that there is, or that there ever could be, anyone better than you out there for me.I love you with my whole heart. I have never trusted anyone the way I trust you. Sometimes I even doubt myself, but I know I will never doubt you because you are my true love. I know deep down inside that you will never break my heart or let me down in any way.Thank yo
Read more