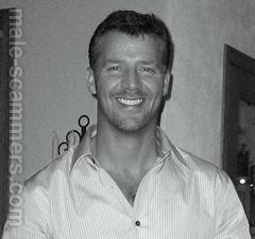 REPORT N1 (added on December, 6, 2011)
Randi (USA)
This gentleman is well mannered and very smooth. he will tell youhe loves you and that he is woking as a contractor Structual Engineer and after knowing youhe will ask you to send 500.00 westurn union toa Fred Martins in Kejia Lagos Nigeria.
REPORT N2 (added on May, 30, 2012)
Pat (USA)
Contacted by male as user ID freetogo1 on Datehookup as name provided by him as Scott Robert Cole as living in Beverly Hills, CA. Has changed his ID in Datehookup as Robbito now in Houston, TX. Gave email as mrscottrobby@yahoo.com. Previously in Netlog as Robert Scott with same email account. Now says he's stranded in Lagos, Nigeria after going there as a structural engineer & he was designing a building. States he worked as an independent contractor. Approached me twice for money. Asked for money to get his children, a boy named Smith & a girl named Kim, back home from Kansas where they had been over Christmas. Second approach for money was he's stranded in Lagos due to unrest over Subsidy & government issues with gas. Says has no one to help him. Wanted me to get a loan or sell my assets so he could have money to come home. I told him I didn't have money & couldn't help him.