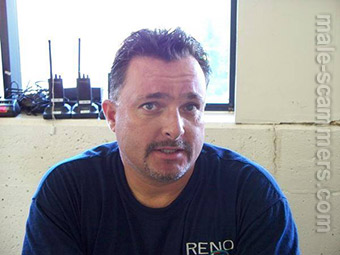 REPORT N1 (added on October, 17, 2013)
Gladis (USA)
I did it out of anger when I found out there were 2 other Anthony Ritch men on other sites using the exact same profile. Then I searched his picture and found the same pics from okcupid where we met on catch4catch as Eric Douglas but instead of living in Charlotte NC he said he lived in Fresno, or Anaheim or Los Angeles. And in CA he is 56 not 46. Same story as every other scammer: engineer, widowed, daughter, no family, from Uzbekistan studied in Scotland or from Germany and studied in England. Fell in love fast and stated talking marriage within a week. He planted seeds to ask for money later. His daughter was traveling to South Africa in a tour with school from Europe but he didn't know when she was coming back or the date. And got mad at me wen I said he was raising red flags by not knowing when she is going to return from a school trip.
We couldn't meet for 4 wks because he was traveling to Houston for an offshore oil rig job. And then I started looking online for more info. He also couldn't send photos over the phone. Only via email. When I hesitated to give him my email (it is my full name) he became angry and rude.
I wish I had saved his love letters, which were always sent very early in the morning. I was just so mad that I fell for this guy. He never asked for money but wanted to know if my family had money. He also wanted to know details about my past relationships. He bragged about having plenty of money, motor home, motorcycle, and cars to travel. He also talked a lot about how much he adored me. And would be the perfect husband.
He never asked me for money. He's a con as evidenced by the multiple sites he is listed on with same picture in different parts of the country. And same picture different name and similar stories. And he uses the Christian faith and bible scriptures to come across as a genuine guy.
I know we aren't supposed to bait scammers but I got so mad and sent him an email after I found out all this stuff. He replied and it is below. (Sorry for the language on my part). Also, he started using vulgar language (fucking) late at night once which was odd at the time because he was very formal, charming, polite and wrote like he was very intelligent, even though he said "talk to you soonest" often.
After I found out about him I text him to never email, call or text again. And if he harassed me I would call the police. I deleted Facebook ( we weren't friends but I am scared of is theft or something crazy) okcupid, match, and anything else out there that has my pictures on it. I also blocked him in my phone.
This is the last email I sent him last night and his response (I only have him my phone email address)
He never denied anything. He's a fraud whether he's scamming money or not.
There's plenty of photos online, and on Facebook(public photos) of Anthony Ritch and Eric Douglas using pics of same man and different locations.
Thanks for reading and hopefully this will help someone else out there who just wants to fall in love
REPORT N2 (added on January, 16, 2014)
Diana (USA)
This guy literally lied to me for 3 weeks, tried to extort money--which he did NOT get! Even when I confronted him with a text I got from a friend warning me about scams...he denied it and lied horribly...a few days later told me he had gotten a job in UK and had invested a half million of his own money & supposedly a piece of equip broke and he needed 5K!!!! He also talked about his daughter Lois & sending her to nursing school in the Caribbean!! He says his wife died 3 years ago from kidney failure. his man is reprehensible He did not get anything monetary or material from me, but what little trust I was having in men just died! Also it hurt me terribly that a man would be so completely evil to play a woman's heart and emotions the way he did. He should be arrested and put away for a long time. I would definitely testify against him!!

Romance scam letter(s) from Eric Douglas to Diana (USA)
Thanks For the smile,I went through your profile and I must confess that you indeed do have a very lovely profile and smile.
I would love to know more about you if you don't mind,
Please tell me more about yourself.
Merry Christmas

You seems to have a great personality which is what really caught my attention.I love the way you express yourself and the things you wrote up here about yourself.I would love to use this medium to tell you more things about myself so you may get a better understanding of who I am and the man behind this profile

My name is David and I am a gentle man with so much passion in my heart,I'm a creative,artistic,loving and affectionate man in search of a woman for a serious relationship which has actually led me coming over this dating website.I do have a lovely daughter that means so much to me.