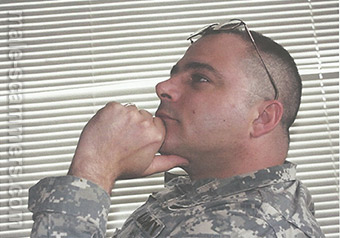 REPORT N1 (added on October, 10, 2013)
Teresita (Philippines)
I first contacted him. He was an army officer, command sergeant major, detailed in Kabul, Afghanistan (retired Aug 2013). Asked me to pay for satellite installation of phones so we could communicate with each other. Said his bank account in US was frozen because someone had hacked $20,000 from his account. Asked me to help him cash out his stocks of more than 2 million dollars but had to put out money to cash them out.Asked me to sell my real estate properties to raise the money. I was unable to sell these properties. Made him mad at me. His 12 yr old son who was with a nanny in England got sick & hospitalized. Needed money to be sent to Nigeria to buy his medicines. I refused to do it. Stopped communication with me, he was upset. Two months later, started talking. Retired from the army, will come to meet me in my country but had to pick up son from England. Ran out of cash he claimed.Had a cashier's check, big amount, but unable to cash it. Wanted me to send him $8,000, promised to pay me back. I said NO. He got mad & that ended our story.