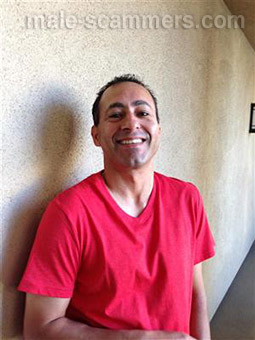 REPORT N1 (added on September, 30, 2013)
Elaine (USA)
I met Tony Moore in May 213, he contacted me and his profile said he lived in Houston Texas. I had just joined christian mingle.com. I Ask him why he contacted me since I lived on the East Coast. He said he had a good feeling about the profile and the picture. We talk for a couple of weeks and he told me he had to go to England for a contractor job he was doing. Within 10 days of him claiming to be in England he requested money. He said there'd been an accident on the job and his main piece of equipment was broken and he needed 60,000. I told him and I did not have $60,000 and he dropped the subject for awhile. We continue to text and talk on the phone. About two weeks later he said he was going to sell the contract And he needed $10,000 for attorneys and to get home. Like a fool I send them 10,000. However he had me send the money to an account with another persons name on the account, not his. The name on the bank account was I Martins. When he requested money the next time he wanted me to send it to an account with the name E. Clarkson. Then I got a call from a man posing as a tax agent Who told me Mr. Moore had been arrested at the airport because of back taxes he owed to the UK. Then the request came for more money, this time he ask for 12,000.
During the many weeks of conversations Tony told me how much he loved me how much he needed me, spoke of his dead wife who Supposedly died of leukemia , father that had passed away, a mother and sister that lives in Belgium. With the request for more money I decided to hire a private detective agency that worked internationally. The report stated that Anthony Robert Moore had been involved in Internet fraud, as well as scamming money from women and he was listed on several black lists with the police and other authority's. The agency also stated that the pictures he sent of himself were not him. He made several crucial mistakes during the relationship that caused me a alarm, one of the mistakes was he accidentally pressed his phone location which was sent to me which showed he was in Nigeria not the UK. He has a thick African accent and a very deep voice. Ladies, this man is crafty. Do not send him any money. When he realized I would not be sending any more money he did not want to talk to me anymore. The relationship lasted 4 months.

Hey, there is so much I want to tell you, a lot has been running through my head lately. I'm having trouble putting my thoughts into words so you will have to bare with me through this.I keep thinking about the future, about life, and what I want out of it. I keep thinking about us and what this relationship means to me. I keep thinking about these things and I realize they go hand in hand. This relationship is my future; it's what I want out of life. I want to grow old with you. I want to experience this crazy love forever and ever, and I really think I'm going to get to. I want us to walk through new houses picking the one that would be just right for us. I want to see you walk around our house in a big t-shirt with your hair down and catch me staring at how gorgeous you are. I want you to pull the covers off me at night and then I have to get even closer, if it's possible, to you to keep warm. I want to see you laugh like crazy at me when I
Read more