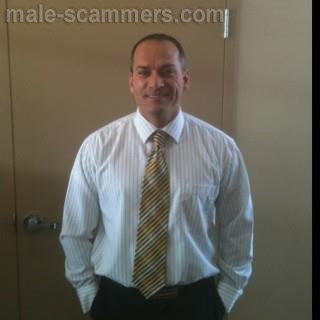 REPORT N1 (added on September, 26, 2013)
Cindy (USA)
I met this guy in christian mingle, he said to be an civil engineer from sidney, australia, divorced and single father of a girl name Nikkie 9 years old, at that time he lives in Houston, Usa, but after few days he move to cape towm to work an important proyect over there, he said he took his daugther with him, claimed love since the beginning I believe in him and trust him, after few weeks in cape towm he said started having problems with a crane machine on the site work, asking me to send 5.000 dollars to help with this promising to pay as he arrived to marry me in the states, I was so stupid to believe and make a transfer where of the money , after that his situation became to be worse with a accident on the work site and here I am sending him more and more money everytime as also sent blacberry phone and different things he requiered from me.
this is a painfull story to me coz I was so in love with him, he talked to my kids over the phone and make ;loan money everywhere to help him. i was so blind and in love to figure out this....
I opened my eyes when he say he will finally come home with his daugther on sept 2/2013 and and sent him to buy the tickets, i will get pay when he arrive to the states and make his checks cash.
the day he supossed to arrived I got a phone call telling me that he passed out at the airport and he was in the hospital, lof course asking me to pay for it, but at that time I did not sent more money, coz I finally knew was something wrong with the story and I dont even still having a coin after all I already sent.
So far this the painfull story in my life that broke my heart and my pocket. Now I owe money everywhere and still crying for my stupid way to be.
REPORT N2 (added on March, 10, 2015)
Yvonne (USA)
I met this man on Match, immediately he has me email him at his personal email. We have been emailing, texting and talking for 3 months. He tells you he is falling in love with you after a couple of days and wants to spend the rest of his life with you. Calls you baby that way he won't call you by the wrong name. He portrays a very loving kind caring person that obviously who would not start falling in love with him. He has an accent, very sexy voice. Takes you in hook line and sinker. We met in December he said he lives in NM, for vacation he, his 11 year old daughter and his sister went to Dubai. He decided he would stay and do a job over there he is a contractor. All the money dealings were suppose to originaly be for our future, then all of a sudden its for the job he is working on. What he really wants is money, fortunately I did not have any. He sent me a bogus check for 9,500.00, I deposited it in my bank account, bad check, but not before he asked me to send a 1000.00 money gram to him. Of course he promised to send money to clear it up but did not. Another check was mailed to my bank for $68,700.00 it also was a bad check. Thank my Heavenly Father that always watch's over me I did nothing with that check. A friend I work with suggested I use the internet picture finder that will find anyone that has a bad record on the internet and here he is with 7 different scams against him. These are just from dating sites. I questioned him about some I found on another site and of course he denied them. He has so many different names it would be amazing if he knows his real name. He emailed me and said he would be here on Saturday 3/7/15. I have emailed him back about him being all over the internet, he has not contacted me back since, but he also is claiming he has no data left on his phone so he is borrowing other peoples phones. Right!

Romance scam letter(s) from Alex Dave Hewitt to Cindy (USA)
I come from a middle-class background and is all about "Connection"; I was born in Sydney, Australia August 16th, 1965. I am the only child of my parents, my mother was from Mauritius While my dad from Australia... my father has worked a variety of jobs, but he ended up in construction Before he died then I was 5years old.

I decided to take after my father in construction but in a different style and manner Civil/Construction/Building Engineering), my mum was working as a medical bullier for the government, she bills claims and medical stuffs, she died when I was 24 years of age, I spent most of time with my mum. when my dad died, we went back to Mauritius and later returned to Australia when I was 10 years old, most times we travel down to Mauritius for Holidays while I was schooling in Australia.

When my mum died, there was nobody to talk to as we were very close, she was so protective and always keeps me to herself, it was very difficult for me, and then I
Read more

Romance scam letter(s) from Alex Dave Hewitt to Yvonne (USA)
oh no.. you mean you have not been getting my emails? i sent you an email asking if you have an IM? i am very must interested and i want to make sure you are okay with me before i cancel my match profile.. i really want to get to know you and get acquainted..

oh okay then add me up

Skurt is my name.

Oh you mean your baby girl came last night? That's nice , well I know how happy it is for you to have her around... Yes I finally slept.... Am glad you slept too...