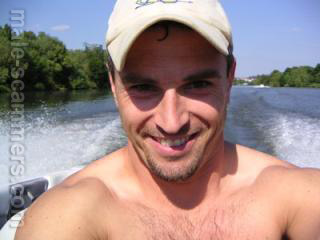 REPORT N1 (added on September, 12, 2013)
Brenda (Canada)
He initiated contact to me Aug,20th/2013 on Match. We stopped conversation on Sept,10th. We have been talking for almost a month. Contract award and also the last picture was the 1 he had on Match.
REPORT N2 (added on November, 13, 2013)
Johnni (USA)
He contacted me on Sept 25, 2013, said he was 45 widowed with a 7 year old son, lost his wife during child birth. Lives in connecticut. Works for a construction company called bellscon, fake website. Italian with no family. Has an accent. Said he landed a contract in Africa to build a road, few days later said he needed me to send him money to pay taxes and open a bank account. We are still talking and he ended up coming clean to me, he is from Africa, 28 years old real name is Joshua. Professed his love to me very early on. Sounds like he scams for a living. He is very good and convincing. Pictures he posted are not of him.

Romance scam letter(s) from Jimmy Kaylor to Johnni (USA)
hi, this mark, form eH. how are you?

am good dear. just having quite a busy day tho. hows your day going too? my son's 7 year old. tell me more about yourself, i attached my photo to this mail, please do thesame, thanks

AM from italy, but moved to america 11 years ago. reason being that i had a job offer from bellscon, a construction company based in beverlyhills. but i oversee their branch in conneticut, new haven.
am a construction manager alongside i own my own small scale construction company, which is majored in roadconstructions.
thats about my professional life, and now about me myself, well, lost my wife 5 years ago. I have a son, whose 7 years old, plus, tried dating, but the woman I met was only with me because of my money, which broke my heart, and she didnt like my son too. so I had to quit. but you know, no matter what, I am still gona need a woman in my life, that's what moved me to open myself to dating ov
Read more