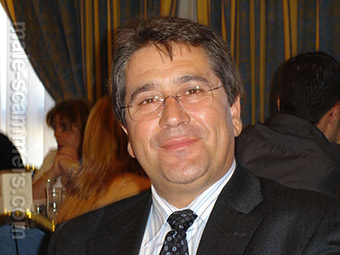 REPORT N1 (added on August, 27, 2013)
Linda (Costa Rica)
This man claims to be a widower with one 10 year old son, Andrew, from Austin, Texas. He says that he went to college in Germany and got his Masters degree in Sports Management in Madrid. He claims that he is a soccer agent, training players in Benin. He began the scam by asking me to send birthday gifts to his son- gold jewelry of course, instead of toys. That was my first clue that he was a scammer.
He asked for money to complete a deal with the government of Benin so they would grant visas for his soccer players. When I refused, he became very angry saying that I doubted his love for me. Then, after a few days of continued refusal, he cut off all communication.

Romance scam letter(s) from David Gardner to Linda (Costa Rica)
How are you doing Linda? Your profile on the site hypnotized, somethings most be special about you that got me think that I will like get to know you as I'm willing to let you know more about. I'm just 52yrs. I want you to know that Distance and age are not hindrance to me as I can relocate if I find the right-one, true love matter most with life partner. I'm given birth to in Chicago. I spent of most of my time in Europe before I came back to California some years back I went to school in German. My mom was Canadian/ American and she also had some Chinese blood in her and my dad was American/British/German.

I lost my late wife in a car accident along with my little daughter 4yrs ago, I have been single since then, I have a son 9yrs going to 10yrs old Andrew by name, I'm a man of dignity a man of one woman. I'm picky and busy man I don't like picking lady at the bar, I want serious lady.

Someone who has the quality I want in a woman. I'm soccer agent and I d
Read more