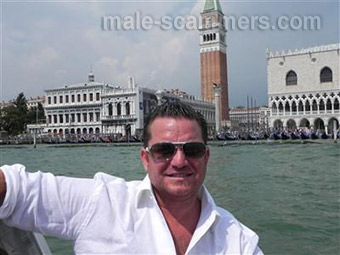 REPORT N1 (added on August, 13, 2013)
Karen (Australia)
I winked at him initially, we started chatting online after a few days we exchanged email address and we continued to communicate, it was arranged for us to meet two weeks after meeting online, and he arranged for flowers and a bottle of wine to be delivered via interflora, before we could actually meet he massaged me saying that he needed to go to India for six (6) weeks to work, we continued to correspond via email and Instant Messenger in this time he was kept telling me that he loved me and was missing me. Then one night while we were chatting he asked if I had a PayPal account when I asked why he say that a friend was borrowing money to him so that he could send to his Mother and Daughter in Thailand but could not sent it directly to them and he wanted to know if I would be able to receive it and send it on for him. I told him that I did not have a PayPal account. Then he asked if I was able to borrow the money to him. He told me that it was ok that I could not help. We spoke the next night, but then I have only heard from him once after I send him an email.