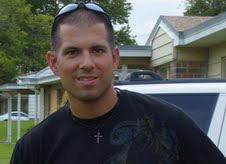 REPORT N1 (added on August, 12, 2013)
Charlotte (USA)
Contacted me on OKCupid, he claimed to be an only child with deceased parents. He is divorced, he claims his wife cheated on him and misused his funds. He has no children and has no family. Has been in Afghanistan for 2 years and is he on his last peace keeping mission and will be retiring. He was always trying to get me to worry about him being where he was. He would send me picture of himself in Afghanistan and it was obvious that he was there so easy to believe him and sympathize with him. He was very quickly so in love with me but was also quick to ask me for stuff to send to him....personal care items, t-shirts, etc. but then he told me, he was awarded gold for saving the ex-ministers wife and son and wanted to send me the gold as it was not safe there. He got me in touch with a delivery man who has stationed in Ghana. His friend in Ghana was asking me to send him $2800 through Western Union for his flight to get the gold to me. Well that the end of all communications.
REPORT N2 (added on May, 28, 2014)
Will (USA)
He claims to be in US Army. Stationed outside of Camp Eggers and Kabul Afghanistan.
REPORT N3 (added on February, 12, 2015)
Pierre (Canada)
Same story, he say he have a son now, he send me pic of him with his son and his friends, still ask money for things and gold.i ask him to send me a pic with my name write on a paper next to his face, the pic is a real fake, with the name of Renteria on his clothes, he said his name was James Smith, and told me he dont know who is Peter Renteria.

Romance scam letter(s) from Peter Renteria to Will (USA)
I'm sure you are doing good and everything is okay,Thanks so much for the conversation.I really enjoyed reading you. I had a very tiresome day.The weather here was quite okay.I'm doing pretty good here and everything is fine. I'm currently at the base office here in Afghanistan working on some projects.It's my pleasure meeting you and I want to take this opportunity to know more about you.As I was saying, I'm single Never Married and without Kids.
I live alone and without a partner.I work in the US Army as E-6 staff Sergeant currently stationed in Afghanistan on a mission.This is my final mission here.I'm going on retirement after this very last mission. I'm originally from California where I own a house..
what are you seeking?Tell me more about your work?
I believed so much in friendship and love..We can get to know each other better and see what happen okay..I have attached few pictures to this message..I will be waiting to hear from you soon...Hugs and Kisses
Read more