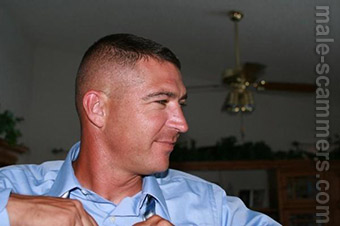 REPORT N1 (added on August, 6, 2013)
Maria (Brazil)
On June 9 I received a message from Steven Taylor and the site MeetMe replied giving my email and Facebook. From that day we talked every day, and on the 06/13, my birthday, he asked me to engagement. I accepted and since then I consider him as my boyfriend. Only he had arranged me to come to Brazil at the end of July, when he would be on vacation from work. But before that received an invitation to give a seminar on veterinary, which he says is his profession, and from that seminar was invited to Benin, Africa, to make vaccination of poultry to prevent bird flu.
Here begins the drama of it. Once arrived in Benin, was the port unloading vaccines that had embarked in London, and found he had to pay money that did not possess. And since then, lives asking me for money to release such vaccines. And I'm not stupid, I tried to investigate and discovered that the pictures he sent me has nothing to do with his image on cam, I made ??a point of seeing.
And from this lie I've been looking for sites that investigate these people who give blow money on the internet.
I have some pictures he had emailed me, beyond what is on Facebook.
I look for help and confirmation of my suspicions.
Sincerely,
REPORT N2 (added on September, 6, 2013)
Carol (USA)
I met this man on OkCupid. He said his name was Frederick Webber (Fred) and he lived in Phoenix, AZ and worked for Northrop Grumman.Corp as a software developer for their defense department. He said he had a 19 year old daughter named Victoria Webber who was going to school in Cyprus. He was a really smooth talker and very believable. His IP address matched his location and I checked his phone number and it matched the area of Phoenix. He said he had to go to Turkey to meet with the US Navy system operators for a contract his company had with them. He was in a remote location of Balikesir Air base - his IP address even checked out for this area as I checked all of his emails that he sent me from this area. His first and only attempt at scamming me was to ask if I would purchase an Ipad for him as he lost his at the airport. I dismissed his request.