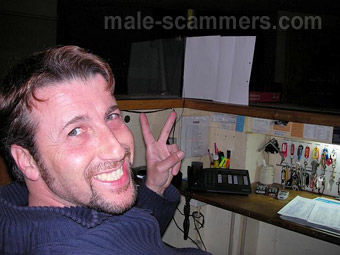 REPORT N1 (added on December, 1, 2011)
Pet (Canada)
David Williams is awesome at his job of being a romance scam artist. He has been stringing me along for nearly two months now. I got nearly the same story line. His parents were killed when he was young and he was adopted by his mothers best friend and her husband. He was married but his wife died in his arms about six years ago from blood cancer. He was left with a son that is currently 17 years old and being raised by his wifes parents while he works for Halliburton. While we were talking he resigned at Halliburton and went to Kuwait to buy a refinery. When he got to Kuwait everything went great except they wanted him to become a muslim, well being the fine Christian man that he is he just couldn't do that so he flew to Africa to buy up some land and a pipeline to begin drilling for oil. When he got to Africa all of his money was frozen for a period of two weeks. He ask me for $1,500 and I told him forget it. He still kept corresponding and then he ask for $200. I told him forget it. The next request was for $7,000 and then the next one was for $500 so that he could fly back to the US so that we could be together forever. I started getting suspicious the minute he ask for money so I started researching about scammers. I even told him about my suspicions and he became very defensive and rude. This past Friday I saw a TV show about romance scammers and some of the stories that they used. I kept researching and today I found him on this site. My heart goes out to all of the women that have fallen victim to these types of people. I am recently divorced, lonely and looking for that special someone. I thought it was David Williams until he started asking for money. BE VERY CAREFUL LADIES! THEY ARE MASTERS AT WHAT THEY ARE DOING!

Romance scam letter(s) from Eric Smith to Pet (Canada)
Good Morning Monica
I just attached some pics sof myself so u can see what i look like..LOL....Do you chat with your Hotmail account??I really wanna get a chance to chat with you

i love you too babe,Hope u had a great night..I told you i will BUY You a new car dont worry about the wrecked car

Good Morning babe
I m soo sorry for that scary email i sent you yesterday i was frustrated because my phone was stolen and i was mad.Please forgive me for making you cry.I still Love you.You can get me at this new phone number 0112348123812771 ,Try and call me i miss your voice,Honey i want you to send me your phone number so i can call you...Miss you soo much.If you got half of the money you can still send it Via western union to Nigeria with mr Charles Information.Hope to hear from you soon