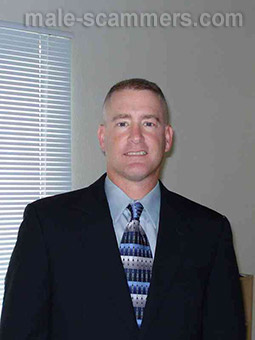 REPORT N1 (added on July, 31, 2013)
Susan (USA)
I met this guy on Match, he immediately emailed me and we exchanged phone numbers and began chatting on Yahoo IM, he said all the wonderful things and i soon fell for him, he said he was a geological engineer but lives in my city, he travels for his job as an independent contractor in gas and oil and then he left our city (supposedly to travel to the Dominican Republic to work on a Rig in the Gulf of Mexico, all the great conversation continued for about another week when he said he began to have problems at work and could he ask me for a favor, Then he asked me if he could borrow $950.00! I told him i did not have that kind of money and he said it was okay, later he began to ask for smaller amounts and when i could not and i figured i was being scammed he started to call me names and harrass me.
REPORT N2 (added on November, 26, 2013)
Valerie (France)
J'ai EtE en relation avec cette personne durant 8 mois, et au bout d'une semaine, il prEtendait vouloir venir en france, il m'a demandE au dEbut 4000 euros, et comme je n'avais pas l'argent, il a commencE ? me demander des sommes plus petites, au total, je lui ai envoyE 600 dollars au NigEria et toujours ? des adresses diffErentes, avec des noms d'emprunts diffErents,je suis sans voix et affectEe, il m'a dit vivre au Texas, sa grand-mOre serait morte en Avril 2013, et il prEtend venir en France dans 3 semaines.
REPORT N3 (added on November, 20, 2014)
Laurine (France)
I get in touch with this guy one year ago, and we exchanged by email during one year, when i supposed to be scammed, i did my investigation, and i find his real profil on facebook, this man is an us soldier who is veteran after 21 years of service in us army, he is married with the woman who is a real estate contractor at Gerogia, i attempt to warm her wife by sending her a message, but she does'nt reply, now i think this man his the real person who speaks with the all of women, he is not a victim like us, because after leaving army he worked like: analyst network at CICA inc: the agence of Department Defence of USA, i think one part of scammers have in fact two life, one with his wife and family, and another at network with different full names, he gave me the detailed of his real life (his souvenir, when he was at Hawai), i'm shocked because he has no courage to produce evidence online if he was innocent person, in conclusion all of scammers don't come from Nigeria or Africa.

Romance scam letter(s) from Andreas Bierhof to Susan (USA)
Many times when I think of you, Here are a few things I wish to do with you at some point in this lifetime:

To Be your best friend.
Kiss you a thousand times a night.
Get caught with you in the rain.
Dance with you in the rain.
Spend a day together in our underwear.
Get drunk together.
Stargaze on a clear night.
Watch the sunset together.
Spend all day with you doing nothing.
Moonlit walks on the beach.
Be more proud of you than I already am at this very moment.
Go on a carriage ride through the park.
Do a crossword together.
Go to brunch.
Have a disagreement with you (it could/will only make us stronger).
Go for a twilight horseback ride.
Watch a bad movie together.
Spend the rest of my life with you.
Have our picture taken together.
Eat ice cream with you.
Make love to you passionately.
Go to a museum together.
Talk to each other using only body language.
Give you space when you need it.
Accept you totally and completely - flaws and all
Read more

Romance scam letter(s) from Andreas Bierhof to Valerie (France)
ohh my God its not me dammit.....i told you and you knew my email was hacked....why would i play with someones emotions for heavens sake???

and am still the man for you.....i love you and am for real.....the ian and the pix you saw are real, all i told you about are real...thats the real me....we have been through alot and now this issue of false identity.....i love you val and God knows its the truth....i wount force you to believe me but rather all i will tell you is either you believe me or you follow what you and read about the idiot that hacked my email, stole the money you sent to me and also stole my pix from my email to rip people off their money...God is my withness that i have nothing to do with this

i told you that when my email was hacked, the person my pix and was using it to defraud peopl.....how would i know that??? its not my fault and am never a party to any of it