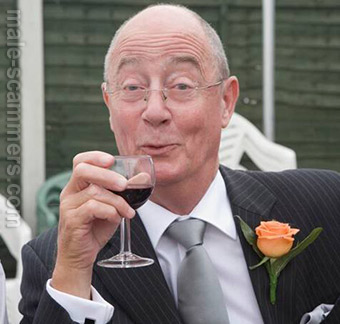 REPORT N1 (added on July, 31, 2013)
Louise (Indonesia)
Richard Weston was the one who contact others, we knew each other for almost 2 months.
Yes, the strange events that accurred that had made me suspect him to be a scammer were when he said he had bought a air ticket to come to visit me in my country, Indonesia, and he asked me to help him again because his workers need money which he supposed to pay them. He told me his money would enter in his account in 2 days, but the workers insisted him to pay them if he didn't he would be reported to the Union, and would be brought him to the court. I said i didn't have money anymore.Then the next day suddenly, there was a man called me saying he was Richard's lawyer, and said he was hold in police station. And to take him out need money to pay to the police and the workers, and after would have been out from the police station then he could fly to my country to see me. I had to sent money 22.000 Malaysia Ringgit. But when he was out he said he didn't feel well because he could not sleep in police station. After 4 days he said he bought ticket to come to see me, would stay with me in Chinese New Year and Valentine day, but his flight was not direct fly to my country which supposed to take 2 hours, and took this trips, he said the route would be stop to Singapore, then to Philippine and the next continue from Philippine to Indonesia. I felt strange, I told him no one want to take that long trips, because Malaysia to Indonesia was very close, he said he didn't know that the travel agent gave that trips. And what happened was the next day which the day he supposed to arrive at my country, suddenly a woman called me she told me Richard had been hold in Philippine custom and immigration because he was carrying gold and 250.000 us dollar in cash, it was a big shock for me and mad me shaking for more than a month. That woman said I had to pay 50.000 us dollar so that they could release Richard and could continue his journey to my country, and I had to contact his lawyer in Malaysia. With heavy heart and very sad that I just knew the reality that he lied and cheated me.
I knew but everything had already too late to know he was not a good person and cheated my money, First, because he used religion as a weapon towards me, he was a Scammer artist, he acted he was very good person that always prayed every night and go to church every Sunday, he gave a call me at every night, he prayed with me before going to sleep, he called me wife. Malaysia Petronas Gas and Oil company bought 21 Caterpillar tractors from his company in United Kingdom, and he was contracted by Petronas to set all of the Caterpillar tractors. First he asked my help to sent money for buying for the tractors, because he used money from his credit card was over used, and he said he would pay me back. Then he asked my help again to pay Malaysia government tax as foreigner, he said he had money only around 100.000 Ringgit, and need my help 50,000 Ringgit, but I paid about 45.000 ringgit, then again he need money for opening an account in Malaysia, because he was a foreigner, he could not open an account, and he manager of the Petronas said he could open an account if in Company name, for the Company name he should deposit around 200.000 Ringgit, he said he said he had some money, but it was not enough and asked my help. I: gave him not all, all the receipt from the bank were kept on my files. I was stupid not to read in internet and in the site that warning not to send money by moneygram or Western union. I counted totally in US dollar were 85.000 us dollar.
Richard Weston till now has not pay my money back to me as he promise 8 days ago. at 10th July he sent me sms from Malaysia, that he was talking with his new bank, so they could give me the money. He was sorry for been late sent it to me.He would call me that day. He sent me another Sms, saying he asked my forgivenes and so sorry he caused the pains, and he wanted us together again and he wanted to make me happy. He used God name again....sent me sms " God Almightly can make the pass to come true again and we will have our joy and happiness again in our life, I can make you happy again by the power of God, pls "
All of his words are lie, he lied to me, he wanted me to tell him my bank account number, but I gave my pastor account number, ( my pastor wants to help me ), and Richard was so mad at me, he asked me about my pastor's phone number, he wanted to talk to him. I asked him why he was so concern who would receive the money, I told him it was me who suppose will concern, care and worry to person who will receive the money he sent, but I am not worry because I believe the pastor. And this morning he said if I don't want to give the pastor phone number then he didn't want to send/pay back my money, and it is weird that he said he would go back to UK tomorrow night, that meant he won't return my money he owe me for couple months. He really intend to Scam me again. Please accept my report,and please tell others so that they will get warning about this person before too late.
I appreciate for your attention.
Sincerely yours,

Romance scam letter(s) from Richard Weston to Louise (Indonesia)
Hi my sweet love,
how are you and i hope you mum is in good health?my love,think for the photos you sent to me...You look just like you lovely mum....Now i knew why you are beautiful because you lovely mum is very beautiful and and pretty..I believe your lovely mum was the most beautiful girl when she was young right?Your late dad make a great chose to have your mum has his wife..Indeed your mum and you look alike..

My love,i fall deep in love with you because of you understanding and your wisdom..Proverbs chapter 3 vs 13-18..It says, Happy is the person who finds wisdom and gains understanding.For the profit of wisdom is better than silver,and her wages are better than gold.Wisdom is more precious than rubies,nothing you desire can compare with her.She offers you life in her right hands,and riches and honor in her left...She will guide you down delightful paths,all her ways are satisfying.Wisdom is a tree of life to those who embrace her.Happy are those who hol
Read more