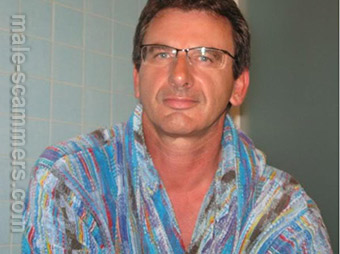 REPORT N1 (added on July, 11, 2013)
Maxine (Trinidad and Tobago)
Currently possess photos of Joshua VItaly Stronov that I received, the person indicated that he owes the IRS USD 200,000 and is currently in Kuala Lumpur, Malaysia trying to access some money in an account that was apparently left by his father. He indicated that the cost of transfer is USD 48,000 and that the amount in his account is over 2.4 million dollars. His daughter's name is apparently Katie and she owns an antique business and lives in Atlanta.
I also have some legal documents sent by Joshua from The Bank of Malaysia where he apparently placed my name as the beneficiary of the money in his account in Malaysia if anything were to happen to him,
I have never spoken to this person via video chat only Yahoo IM and email. I have been speaking to this person for the last 8 months, and I am deeply in love with him. We frequently speak via telephone via the numbers provided above. I have sent money to him via Western Union facility twice in the past, and even tried to procure a loan with Scotiabank for TTD 150,000, but my application was declined on 07/02/2013.
I desperately need your help to verify if this person is an online male scammer as I am profoundly in love with him and we always talk about spending the rest of our lives together, making bables, etc.
The photo on the Yahoo IM profile is the same photo used on the person that I speak with daily via Yahoo IM, Joshua Vitaly Stronov.
REPORT N2 (added on August, 24, 2016)
Jane (New Zealand)
He made 1st contact via older dating site Aug 2016. Played into the information on the site and very quickly wanted to communicate via e mail off the site. Stated that his mother was Maori, father Italian. When questioned about last name of Collins which is Irish, not Italian said real name was Joshua Collins Galliano. Claims he is an only child, very alone in world as lost contact with army colleagues. Listed on dating site that he was widow this turned into divouried and then his ex-wife had died 4 years later. Claims to have a 30 year old son Donald who works in sports medicine in Spain who he has no contact with as Donald blames scammer for break up of marriage. Also claims to have 19 year old daughter Michelle who is at boarding school in states and about to go pro volley ball. Maintains that he was born in Italy, speaks Italian, lived first 6 years of his life in Italy then family moved to America. Went to uni then entered army, retired as Colonel. Stated on dating site that he lived in Auckland NZ but provided disconnected ph number for Wellington. Said that he had come to NZ to make contact with his mother's family and had fallen in love with NZ. When questioned stated he actually lived in Wellington and had made a mistake on web site. Also stated that he was actually on an oil rig off coast of Ghana installing high end security system. First mention of money was that he financed the project himself at significant risk. Then started to mention that final shipment of parts to complete the project had not been delivered so he was stuck on the rig, because of security on the rig he was unable to track the shipment himself. Asked me to track the shipment on www.globalsafe.com. Reply from web site by Frank Buck stating the shipment had arrived in Ghana but was being held by customs as over weight and needed stamps renewed cost $12,000 US. Asked by Joshua to pay on his behalf. No money sent and told clearly that I wouldn't be sending money. Web site is fake. Definitely a scammer who appears on this site having attempted same story with others. Blocked his e mails.

Romance scam letter(s) from Joshua Vitaly Stronov to Maxine (Trinidad and Tobago)
Hello Baby!!
I would chat with you soon! been having troubles connecting Yahoo messenger! I love you

Dear Client,
This is to inform you that I'm in receipt of your email and content well noted. I have just returned from the High Court and I was able to obtain Act 424 Powers of Attorney of the 1949 Constitution of the Malaysia Law. As Mr. Stronov representing attorney, I have filled out part of the form and have requested from Alliance Bank to send a copy of his thumb mark as he is unable to sign on it right now. You are also required to go through the form and examine thoroughly and sign or thumb mark in the space given beside your name (Mrs. Mendes).
Meanwhile, I have procured the IGBSC and have forwarded to Alliance bank. By the way, a notary seal/stamp fee of $5400 will be paid before the POA can be active.
Thank you for your anticipated co-operation.
Best regards,
Bar. Chwen Kang
LLB (Hons) UCW Aberystwyth
Advocates & Solicitors

It's always nice to read your messages. I have really grown fond of you and look forward to meeting you in person soon.

The shipment isn't here yet and that is a main worry for us here. I have tried to track from their website which is www.golsafe.net but we are unable to access it from the rig location because of internet security without a VPN.
I really need help from the outside world.

Oh now i understand what you meant, i know you really don't want me to disappear and i am not one for disappearing into thin air either. However, I am not going to be out of communication while i travel because i will be able to ring you and speak with you once i leave here for mainland.

Unfortunately, i don't really have a dark complexion unlike more Maori people. You can be jealous that i have a bit of a tan and look equally darker than you probably are lol. I think i am fortunate to have messed the worst of winter too but now i am home
Read more