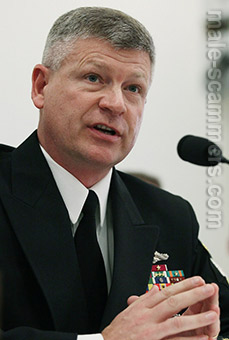 REPORT N1 (added on June, 26, 2013)
Barbara (Germany)
He contacted me on FS24, we send email for 4 weeks, using skype for 3 weeks, he introduced himself as Rick Detlef West (uses photos out of Navy sites), born 10.03.1958 to date in Okinawa, waiting to be retired in August 2013, wants to stay in Germany, no family at all, divorced, after 1 week chatting he began talking about needed help for getting his money to Germany, will be done by diplomatic courier due to security necessities. His couriers name is Stephen Kissi (diplomaticsecured@outlook.com): I found at lot of textpassages of his 28 mails on this website.
REPORT N2 (added on September, 25, 2013)
Lorraine (Australia)
I met tis guy reckon he is a navy officer fo4 and on special removers. he was in the navy for 25 years. now he in Ghana living with his son and other people. he been begging me to give him 50,000 to bring him home to me.that was 6 months now.he got a prest to send me fake travellers cheques to me and they were fake.so he was still begging me to give him money.but I check him out. he a urkarine man and never was a navy officer. he a truck driver. so he a liar and loves to pretend he a millionaire too.but he not. he loves getting other women to give him money to come and love them. but he don't come home. he just rips off women.
REPORT N3 (added on April, 11, 2014)
Nadia (Croatia)
He contacted me on skype (skype name: johnson.morris21) requesting to reply to his mail and I regretfully replied on March 15th. Mails continued to come till April 3rd and the last chatting contact was April 4th. He used poems from internet instead of his words, skype chatting was different, incorrect grammar, I discovered given false information thanks to DOD arhive news. He requested GBP 6800 to be paid to his agent Carlson for clearence to deliver a package through diplomatic channels to me. Nothing was paid. When he realized that I was not paying he stopped writing, answered none of my mails and is offline on skype from April 4th.
REPORT N4 (added on September, 25, 2015)
Mary (USA)
Started chatting with Rick West aka Paul West on July 17, 2015. He said he was stationed in New Orleans, LA and was an E6 with the Army and has been in the Army for 34 years. He was raised in FL, divorced 5 years and had one son named Jim. He sent me flowers and apologized for not responding to our chats. Asked me for money to bring his son and nanny from TN. I told him I was not going to send him any money cause of some men I had chatted online before had asked me for money, he said oh you think I'm like them. He apologized for asking me for money. Said he was being shipped out to Syria on a secret mission and he would be back soon. He has been in contact with me almost every day then his online chats were becoming less and less. So I checked him out on this site and here he is listed as Rick West. Please beware of Paul West aka Rick West, he's a smooth talker.
REPORT N5 (added on August, 17, 2017)
Eloha (USA)
Military scammer - image stolen.

It thrills my heart to get a chance to email you,thanks very much for your email and the picture,you look beautiful.I will take this opportunity to tell you a little more about myself and I hope by the end of this email you will get to know much about me.In your reply I will also love to know much about you too.But to start it all I hope you are faring pretty well.

As I already told you I am Rick Detlef West,I'm 55years of age,single,Divorced and lonely,smile:)I have descents of American and German in my blood so pardon me for my accent and constructions of words.I hope you will love my accent when we talk more someday soon,ha-ha,I'm shy of my accent but I hope you can cope with it.Its sad but I have to tell you,everyone in my family has passed away.I have lost my parents and my only brother.My brother and his family were involved in a gory motor accident that lead to his death.I have a height of 5'9'I'm well traveled and I have gained
Read more

This is Mr.Richard Mawuena Sekle who happens to be the legal representative of Mr.John Kirchner in the sale of part of his building project here in Ghana.I am therefore sending you this message in respect to the transfer of $950,000.00 to your account as directed by my client as been amount paid for the sales of part of the building project.It will be of great importance if you could get back to me with your account information so I will be able to effect the transfer with my bank as soon as possible.

John is an honorable man and I think you lucky to have found him.He must be deeply in love with you and I hope you will take very good care of him when he gets there to you.I also will appreciate that you keep me posted once the money gets there to your account.