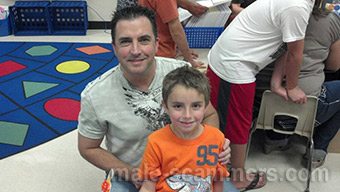 REPORT N1 (added on June, 26, 2013)
Tracy (USA)
Have been scammed by this person for money for son's field trip, contract documents to be renewed and flight ticket. I have emails and copy of contract and messages from messenger. And I have his picture. He uses poems and promises of a relationship when he come back from a job overseas on an oil rig in two weeks. Almost four weeks have passed, No Chris. Very romantic, and loving. After two weeks he claims he is in love with you. Claims he is a manager and geologist for exxom mobile. Makes promises, Avoids any questions about himself. Says his son name is Bryan, but pic with name tag says Corbin Burns. Met on Twoo about 2 months ago, got to know each other for two weeks via email, then wants me to delete account on twoo. Plus conversation through yahoo messenger. Asked for money only 3 weeks of chatting. Finally when I ddint send any money for his flight ticket he stopped contacting me. I only lost 300 dollars, but to me that amount was money I didnt want to lose.
REPORT N2 (added on October, 10, 2013)
Celeste (USA)
I met Chris Richards on a site called Twoo, and he and i talked for approx a week and then he told me that he had to go out of country to Argentina for a week, and that he would be back in a week. While he was there, he got what he went there for and he even got the paperwork and sent me a copy of it by email to which I still have; but then when he was ready to come back he called me and told me that he needed some money to pay for his paperwork as they found that it was expiring, and i told him that i found that hard to believe as they don't let you leave the country if you don't have at leave 6 months left on your passport and you have to have a visa to go well. He told me that they just saw this and that he was just given the paperwork, and that if he doesn't pay the money then they aren't going to pay him the money that was promised to him. Anyways he wanted me to send $3500 dollars to a woman by the name of LaTina Stevens, who was supposedly located in Fort Worth Texas and that she would take care of things and then he would be coming home to me and together he and I would go and get Bryan from the boarding school, but when i told him that i didn't have the money, he got mad and would ask me if I had people that I could borrow it from and all kinds of things like go and take a loan out at a bank and many more.
There was one time he even asked me to send money to his son(Bryan)whom he told me was in a boarding school and that he didn't have the money to send to him, but that he would repay that to me as well. This kind of stuff went on and on and eventually when he finally seen that i was not going to send any money to him or Latina or to his son he told me that once he got back home that he was not going to come and see me and for me not to be in touch with him at all. Once Chris made it back here to USA(supposedly) he contacted me and told me that he was home in North Carolina and the he has Bryan from the boarding school and that they are having a good time. Chris has been in touch with me from time to time like on his birthday he contacted me to tell me that it was his birthday and that he and Bryan were celebrating it and having a good time and I wished him a happy birthday and told him to wish the child well also.
When I come to this site and see his picture here I am sooo thankful that I didn't send money and that I followed my instincts. I am glad that there is such a site here as this one and I pray that you all will keep posting pics of people that do stuff like this.

How are you honey?.. Thanks for that wonderful mail this morning i really appreciate that and i want to say big thank you to you and also let you know that you are the best and that i will always love you...

No one in this world knows the feeling that I get when I chat with you. Nobody has ever made me feel like the way you make me feel and that is such a crazy feeling. It feels like I just want to grab you and be in your arms forever and forever and never let go. I want to kiss your lips and never end - just keep going.

Every time I think about you, it gives me more and more strength with which to carry on my life. It makes me happy to be alive knowing that you have came into my life and all I know is that I want to be with you! hope to chat with you tonight...