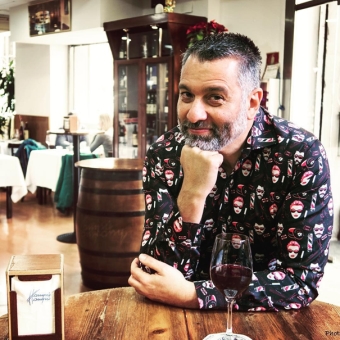 REPORT N1 (added on September, 21, 2021)
Renata (Netherlands)
This man contacted me via dating site Lexa. We chatted there for 1 hour, when he asked me to switch to email.
After 1 week he added whatsapp as communication method. A few days later he called me via Whatsapp, and the next morning we video called for 20 minutes.
He was overly flattering, giving me many compliments. He told me his wife died 4 years ago and he has an estranged daughter of 25. He claimed to live in Brussels, and that his father was Swedish and his mother was from the UK. He said he was a contracter in the oil industry, and he sent me a copy of a contract he was trying to close for 5 mln .
He also claimed to be financially well off. Next Tuesday he would travel to Turkley to met the client and hopefully close the deal.
Every morning he sent me a love song from youtube , adding a text (which I found out he coipied from the internet).
His emails were long, in perfect English, but I found out he copied entire paragraphs from the internet.
Yesterday he sent me an email in which he told me he wanted me to be his lover for the rest of his life and he wanted to grow old with me. This while we had not even seen each other in person!
This made me suspicious. I reverse searched his photos onl Google, and found that these pictures belonged to someone else (Linked in profile). When I reverse searched his phone number I saw two reports of him being a scammer.
When I confronted him with these facts, he became angry: how dare I do research on him? HE sent me a pdf of his passport (fake i guess). He called me immediately and humoured me and flattered me until I told him I would trust him... which of course I didn't. After some more research I found him on male-scammers.com. I have immediately reported him to Lexa, Whatsapp, and of course here!
I am very glad that I have not shared any sensitive imformation, pictures nor did I transfer any money.

I must say I feel glad and more relaxed writing to you here. Getting to know someone does require some concentration and most importantly some willingness from both parties and as we have tried to initiate a contact from the site. It would only be fair enough that we try to know each other better and see how we get along. I would be as open as possible as we get along and hope you do the same. They say the best relationships start from friendship so I would rather follow this assertion with a positive outlook. I live in Etterbeek, Brussels. I was born in Stockholm, Sweden but studied in the U.K.

Writing to you feels so cool and smooth and I must confess I am getting more intrigued with a keen interest to tell you more about myself. I was told about the site for one basic reason: finding someone Special, Loving, sincere with herself, and committed to a relationship positively. One who is also willing to love as well as be loved. I totally believe we have
Read more