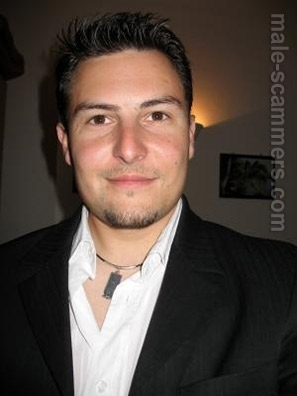 REPORT N1 (added on June, 19, 2013)
Cathy (USA)
I met him on Imesh Music Program with a friends request then it went into Yahoo Messenger with his user name and email...User name David Smith...Email david_mt1@yahoo.com We have been talking since Jan. 2013 and he supposingly has 2 houses one in Hollywood Florida and one in Houston Texas. He won a bid after talking with him for a week in Florida the bid / proposal was for Shell Oil Corp. and the job was going to be in Malaysia he has been there since Jan. 2013 I guess when I run his email address thru Email locators with the headers and footers it puts him in Kuala Lumpur Malaysia...I have mailed him a new computer stated he broke his when it fell off the bed of his hotel room and all they had there were Asia language computers so I mailed a new computer and the price I paid to mail OMG 495.00 plus the computer thru Fed Ex. which that was supposingly mailed to his personal assistant that shell had provided. Then it was not long after that he started asking for money and I have been stupid enough to believe it all. The price we pay when we think we love someone. I have sent money thru Western Union and Money Gram and also thru Bank Wires But the money was always requested by him and he said he could not receive it there because all the western unions , money grams and the bank wires he needed his personal bank account to receive any money there in Malaysia so he has sent me many different names to send money to including 3 different bank accounts which he stated were his workers that shell had given to him and he was not scared of not getting the money because he had a file on them with their addresses and they could be found and he could fire them and turn their file over to shell to explain the termination of the worker. He just recently stated he got a 6 week extention from shell on his work it was suppose to be a 12-15 week contract but he owes a Chinese man 358,000 dollars for a concrete mixing truck that his workers damaged and has to pay him he needed 7000.00 to get him paid but it broke him and the Chinese man had called his attorney etc. and he had to use some money for other materials which was another 2000.00 and then he was robbed in another city in Malaysia from a taxi driver for the materials he bought. Now to get straight he needs 3200.00 plus some living expenses of at least 800.00 and he states he has put over 3 million U.S. Dollars into this job. He did not have to be insured thru shell oil if they stated they would be taking care of their own expenses. He can be very Arrogant, Stubborn, And demanding, He does know quite a bit more about me then I do of him when I ask questions about him he says he was born in Sweden and is a black belt etc etc...And I have heard another phone ringing in the background a couple of times when talking to him and also heard a woman leaving a message one time and he quickly turned it down. I ask what was the phone ringing and he ask what I was talking about then I said was that your alarm he said yeah yeah it was my alarm like he could not think quick enough and just agreed. He is extreamly intelligent and he does not do stupid at all and we still talk I am looking for a good way out it seems to be a little scary at this point because he knows so much about me. I know I can cut the calls I do have call blocker on my phone also but he has sent flowers to my home address before leaving for Malaysia so this makes it a little scary I was so stupid and nieve he has got me for 16,000 and wants the other 4000.00 which he will not get !!!...I am sure with his Arrogance and stubbornness we will be in a huge fight very soon. He also went by another name I recently found out about on Bigchurch.com it was Jack something I believe and some dating site.