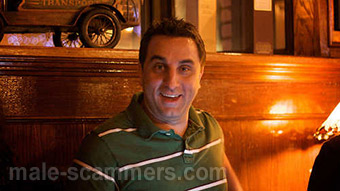 REPORT N1 (added on June, 17, 2013)
Charmaine (South Africa)
We started chatting on Badoo, he said he lived in London and was a engineer. He got a big contract and left a week after we met. He claims to have two kids, Maria and Lex. His wife cheated on him with another man strange how he got the kids. Well told me he loved me and that once the contract is done that he will come and visit me. Once on the ship he wanted to get married or engaged. I agreed and then the fun begun. He wanted 1200usd from me to pay for an engagement certificate. When I said I dont have it he reduced it and when I still refused I became the wicked woman and I broke his heart and I am killin him and what not. I found him to have two other profiles on facebook and when I ask him about it he said that some stole his identity strange how all the photos is all the same. Well he got his attorney to contact me and his so called best friend to try and get the money. Then when I refused I was the bad one and he deleted my off all profiles he had. So girls look out he is cruel.