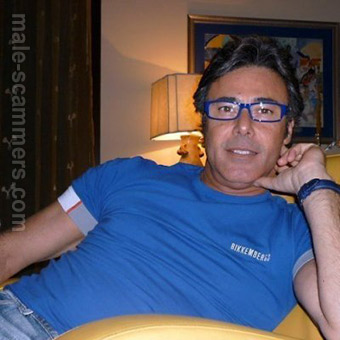 Romance scam letter(s) from Carlos Moss to Yvonne (England)
The papers. Today is the ultimatum but I pleaded to them till Wednesday baby. They said they wont allow me to work by next week Wednesday if I didn't pay and they will charge me to court

Romance scam letter(s) from Carlos Moss to Elena (Ukraine)
My darling Elena,
I really do need your assistance here now... My mother in law has been able to come up with 5000. I still need 15,750 to make the complete payment.

True love never die, its leaves never become wither no matter the weather.
Show me what you have done for one another and i will tell you how far you will go together.
Real love do not betray one another no matter the distance and circumstances, they remain committed to each other.
Love is a responsibility towards one another, those who are not ready for it should not venture into it.
Love takes advice and accepts correction with great appreciation.
Love does not condemn but encourage one another to produce the BEST.
In the atmosphere of love, there is no restriction. In the gallery of affection there is no limitation.
True love breaks barriers and makes impossibilities possible.
Love is like a string on oxen that moves them towards the same direction.
Love grows by intimacy and become str
Read more

Romance scam letter(s) from Carlos Moss to Rachel (USA)
Well I felt very happy and lucky meeting you and I am very interested in you, thanks so much for replying to my email. I hope we can meet before I trip to Germany or somewhere else.it depends where it clicks for me.well,I love my work a lot and at the moment i have a lot project going on and that what keeps me busy! I hope you are having a good day! I thought I would write to tell you a little more about me.Anyway,this shouldn't sound funny but its all about me and what indeed that I seek for in a woman, if the below suits you, then I believe we can accomplish life and make it much more beautiful to enjoy for the rest of our remaining lives specially at our age. My life is an open book,no hidden secrets or agenda .I have a life full of history...At our age we have created some.haven't we?Anyway, I was born in France Paris in a municipality called Bois de boulogne but grew up in texas dallas.This was because my late parents passed away and my uncle who was iving in t
Read more

Romance scam letter(s) from Carlos Moss to Nicki (UK)
Hi,
How are you from the site?
Thank you for your answer on the site. It makes me happy!
Affinity is a good starting point. But nothing replaces the exchange and direct communication to discover our commonalities. This is why I allow me to contact you. I look forward to learn more about you. I am a widower for 3 years and without children, I want a sincere and serious lasting relationship that will allow me to completely forget what I experienced in recent years since the death of my wife and my only son helped a lot affected, so I stayed for years without people because I believe that I had not yet finished to forget that pain. But now I have taken taste to life. I try to rebuild my life without waiting! So I'd like to know a sweet woman, tender, sensual, very simple, real, funny, sincere as I am. I take care of myself, I practice many sports which allows me to keep the line and to be even younger.

Hope to hear from you.

Romance scam letter(s) from Carlos Moss to Eloha (USA)
Hello. If you have friends who are in serious problems and money lending needs for their projects so please I took you focused their aid otherwise I leave you the email address of the person who helped me when I 'was in need is a Mr courteous and very sympha. It appoints Mr Alexandre his email is: lemeure.alexandre@outlook.fr. Made by him of your request and it will answer you