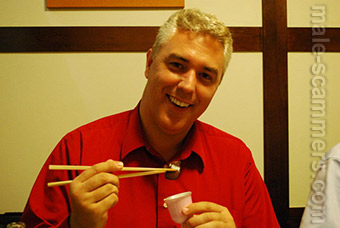 REPORT N1 (added on June, 10, 2013)
Erica (South Africa)
Met him on Badoo and send me photos. Start chatting on yahoo. Phoned and spoke for almost two months, then there was a accident at the site that killed 2 people and 4 people was in a coma. The police in England told him to pay the two deceased families each one 10000 pounds. He had to pay the medical bills as well. He now needs 60000 pounds to fix the machine to finish up. He have collected 45000pounds and only need 15000 pounds from me.
REPORT N2 (added on August, 30, 2013)
Elna (South Africa)
I met Mark Muller on the Older Dating Online SA about 1 Aug 13. He sent me a personal message and I responded. He told me that he preferred to communicate via e-mail rather on the site. Within a week he also asked for my telephone number and we communicated via email, SMSs and short cell phone calls. He also sent me some photos of himself, with his two sons, the late wife, sister and husband and his mother.
Right from the start he told me about this oversees contract that he is working on and was awaiting approval. I was out of town and we were supposed to meet when I come back but then this contract was approved and he had to go to Aberdeen, UK for a month. He had to depart within days and so we never met, but he sent me a copy of the contract letter and his passport (both fake) plus a photo of himself and his son on the plane. The British passport looked fake as the font by the name and DoB differed slightly from the rest and I could not trace his company on the Internet. He also kept on mentioning his wonderful and trusted gardener, Kevin, who lives on his property and that takes care of his place and his dogs as he is away on business a lot.
He did not speak about himself much but the emails were truly dipped in the honey-pot. I was the big love he had waited for as he had been along for 3 years (his wife died in a car accident) and he sent me a photo of him and the 'late' wife. But throughout I was very aware of the very important contract oversees and the very trusted gardener. I smelt a rat within the first week when he slipped up about a movie he and his sons went to see and some of the details around that did not gel but I decided to give him the benefit of the doubt.
Then within his first week in the 'UK' he told me about Kevin's very sick mother from Botswana that came for treatment (warning lights) and Sunday (25th Aug) she died. All his money was tied up in the contract and he left in such a hurry that he could not pay Kevin. Kevin now needed R10 000 to get the dead mother home. When he phoned me to help Kevin and even gave me the cell no I had to phone Kevin...I knew it was time and I had him investigated. Just to find out he is already on you site as Greg van Vuuren. I did not pay him any money.
I stalled a bit by saying I was very busy at work and could not contact Kevin. I received the investigation report today (29th Aug 13) and then I mailed him a copy and told him to never contact me again on any of my 2 cell no he had or via e-mail.
When I looked at the names coupled to the telephone numbers in the investigation report, I have serious doubt if the man in the pictures are any of them, but then I can be wrong.

I was contacted regarding a situation where someone is using my pictures to pose on a dating website. The pictures you sent are mine. I am not Greg van Vuuren. I do not know who this person is and I am not involved in any dating web sites.

I am sure you can understand my hesitancy to share too much information. While it sounds like your employee has lost more, my pictures have been stolen. The files you attached are labeled up to 77. It makes me wonder how many pictures he has stolen. The pictures came from Facebook. I have gone in to my account to make these files private now.

Hello honey! how are doing today? though i should send you my pics when i was in the hospital. sorry i was looking horrific but it nice to share every thing with you.
missing you so much and will be online latter. i am at the site and its crazy out here.....talk to you latter

Romance scam letter(s) from Greg Van Vuuren to Elna (South Africa)
Hello my dear, thanks for the Email, i honestly think that we can take from here but first would love to know you better. tell me a little more about you,what would you love from a man? your past marriage and relationships? family? what do you do for a living? and i will reply with all about me. i am sorry to ask but this is the only way we can get to know our self's and will help us lean more about us....hope to read from you soon.
Do keep well and enjoy the rest of your night till we chat again
kind regards

Thanks my Dear! it was lovely reading from you and i did felt very exited reading such a beautiful and emotional words. you are a honest and open minded woman that deserve to be rewarded with lots of love. i do appreciate every line of your words and do love to meet you, I am partly Afrikaans. my mom is from the UK and dad SA. Was born here in south Africa. i was 7 years when my parents left to Brazil with us, me and my sister. did live
Read more