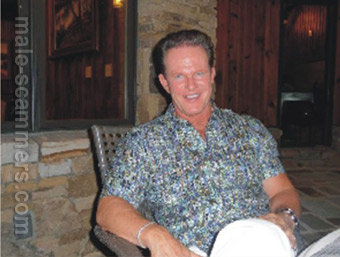 REPORT N1 (added on June, 10, 2013)
Josetta (USA)
I met this man on ourtime. We started communicating via our emails and he also gave me his local phone number in case I needed to contact him. He said all the right things, that he was widowed 5 years and was ready to find the woman of his dreams. He sent me the link to his construction company that he said he owned which is listed above. We did not meet in person because I would say within 1 month he said he had received a construction job in S. Africa but would return in 2 weeks. He sent me his phone in S. Africa which is listed above. We emailed and he would call. He also sent a picture of himself, which I questioned where he was from because he sounded African and the picture was of a white man. I was suspicious early on but was curious to see how long it would take him to ask for money. I have saved all his emails and voice mails. He said there was a terrible accident on the rig that he was working on and his assistant got seriously hurt (he even sent me pictures of the hurt man and the rig). It took him at least 2 months before he started asking for money to help his assistant in the hospital. I was not out any money but the address that he has listed for his business belongs to a Dan Reynolds, but not this Dan Reynolds.

I am very happy to hear from you, I’m kind of new to online dating, getting a response from you sort of made my day; so great that my heart seems to burst with the joy of it. So thank you ever so much! How are you doing at the moment? I’m doing pretty fine myself. I Vow to my words and soul that meeting people and loving with dignity and respect is the key to achieve great success and everlasting love in life, I am self employed and into construction for a living. What is your real name? Been trying to figure out if it's Jo or an abbreviation. Yes I like animal, my late wife has a dog and a cat too. it's been 5years since I lost her.

Whats your favorite color? Mine is golden yellow because it looks like the SUN. I want you to know that I give my all to relationship and I believe that tomorrow's hopes and dreams may never die for as long as we believe in ourselves and follow our hearts. Kindnesses in our hearts will guide us to accomplish many things
Read more