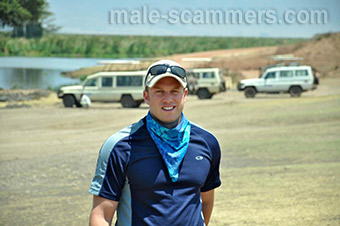 REPORT N1 (added on June, 7, 2013)
Lucy (USA)
He just basically con me out of money for 8 months telling me his real name was William Cambell, and he sent me pictures they seem ligit with his kids .I sent money to him for rent , food and internet use for 8 months, and the last one was for him to come finally be with me $6,000.00 reach I gave him for travel expense and now he told me he got shot and the money got rob. I knew that it was suspicious so I stop then sending it we now ended it and I told him if I were to help him anymore and he was telling me who he was I send it to Liverpool London where he said he lived. But cos he had no ID he could not receive it there he kept making excuses no for me to send it there . I now know he is a scammer.