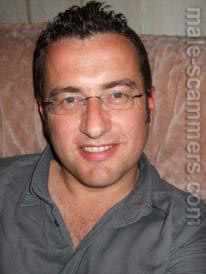 REPORT N1 (added on June, 3, 2013)
Winnifred (Canada)
He wanted me to talk to him on Yahoo Messenger and not Facebook. He gave me his Email and I Emailed him. I told him that I don't check Emails and I don't have a Yahoo account. I told him that if he wanted to talk to me he would have to talk to me on Facebook. There is far too much chat for me to copy and paste at this time.
He tells me he is a widower with a son Michael who just turned 8 on May 12th 2013. He also told me that he was 49 and His birthday is October 10.He told me he was an orphan but I had seen a comment of his profile pic. One was from Ethel Okhiulu " My baby u look good on ur pic" It sounds like a mother to me. There was also one from another woman that said" Blender Liar" He deleted these from his profile page.He gave me his cell # and I called it. His voice did not match the picture. He sounded like an African American. He definately had an american accent.
He is a Freelance Engineer who has 11,000 k invested in an Oil rig job in Alaska. Then he tells me he needs to send 1,100 more Canadian Dollars to secure the Job. At first I thought the money was to be sent to London, burough of Merton, but he said the Contract agent lives in Egypt and wants either a Moneygram or Money Transfer. I tell him that I am waiting to get more money. Wednesday I tell him that when I get the money I will send a money transfer and he says he is calling his contractor. I mentioned something about a Bine # from the Bank and he said the contractor had an account in the US. I got furious and ended up deleting him. I did not send him the $1100 he requested. I am sending you the Email he sent me, it has 2 pics of him attached. One is supposed to be his son Michael.

Romance scam letter(s) from Jeffery Adams to Winnifred (Canada)
Good Morning Winnifred,
I enjoyed our conversations last night night,As i said,it's worth a try to discover each other.. i'm new to this online thing. not quite sure how to begin,but i would give it a shot. It was really nice we got acquainted to each other and it caught my attentions the way you express yourself was so honest and sincere and i really do admire that from you. hmmmmmm! my day is just starting up by writing you this email and full of life, a typical day for me would range from busy to not so busy.
Writing about myself seems to amazes me but I think introduction is a good way to meet quality people in life.So, I would describe myself as an average young gentle man, by name Mr Jeffery Adams. Am a (British) Citizen by nationality. I happen to be an orphan But thank God for what he has made me today having Micheal beside me always . I was given birth to in October 10th 1964 . I speak one language,English but i have a accent due to long stay in Germa
Read more