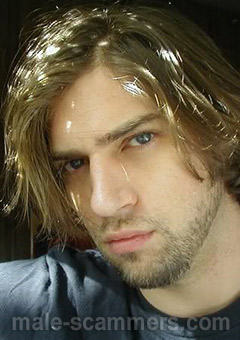 REPORT N1 (added on May, 30, 2013)
A. (England)
Hi, This idiotic chap also tried to scam me, he is now posing on various English dating sites as leocopper or copperleo. He initially contacted me on Mingle2 dating site and seemed pleasant and nice but after about 4 weeks became very overly romantic, slushy, on about marriage, him being a single dad. Having worked myself in a legal field, warning bells starting ringing. I did some internet searching and also searched photos he had sent me as he seemed to want to try and head things towards proposing etc in such a short time. He is now using the name s leocopper or copperleo and pretending to live in London UK, at 16 Canada Square in London, apparently in Westminster. He says he is from New York City, in America and has a 10 year old son called Paul, he is a single dad, having lost the mum during childbirth and has also lost both his parents, sob sob sob story!!! He says he works as a researcher in natural minerals, gases, oils, and also in a lab but in Engineering. After initially a week or so on dating site, he sends emails and asks people to join Yahoo messenger, his ID on there is leocopper@yahoo.com. He emails you his telephone number of +60103863254, he then says he has to go away to Malaysia on business and is sending his son back to USA to stay with relatives whilst he is away on business. He goes quiet for a week or so, then constantly emails love and promises, and tries to get you on Yahoo or texts your mobile asking you to ring him. Do not give out your home address or home telephone number. After about a week he says he has not got his cheque for his work or things like his son in America has had an accident and broke his leg and he needs medical bill money to get back to the States and could you ring the doctor for him. Working in legal work for nearly 20 years I did not fall for it, never sent him anything but decided he was not going to mess with me or any other poor women, so I am in the process of reporting him on every site possible, even the dating sites above I have found him on.

Romance scam letter(s) from Leo Copper to A. (England)
Hello .. its good to keep me updated .. when you free for a chat do let me know ... my weekend is good and going well.. how is yours ?

Hello.., i wish you success in your exams ... yes im well dear .. how are you .. ? i have lived in Westminster for a year and yes i live all my life in NYC... before i came here ...
i like it when i get hugs from you . hugs and kisses to you
thanks babes sweet dreams to you too .. dream about me