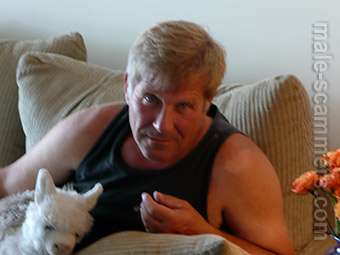 REPORT N1 (added on May, 28, 2013)
Caroline (USA)
This man alleged that he was a mineral scientist from German. He does have a strong German accent. He has taken so much from so many women and continues to do so. He now uses different photos than his own as so many other scammers now use his photos. He is known to have lived in Texas and in the UK. By googling his name and the word scammer behind it, he is find on so many sites.
REPORT N2 (added on November, 19, 2013)
Ruth (Australia)
This man contacted me through Tagged and then added me to Yahoo. I thought I could pick scammers but he had me completely fooled. Not enough to give him money though. I have reported a scammer to Scammers.com previously so was browsing through them again after receiving an email from them. To my horror I came across David's photo under the same first Name and different surname.
I know him as David Williams, a 62 yo Italian living in Gainesville Florida. A widower with a 10 yo daughter names Stella. He is a smooth worker this one, never says a word out of place, never talks sex, never swears. Says he has 2 younger brothers in Ghana digging for gold. I was told he has applied and got a visa to come to Australia to live with me. I had already applied for a divorce and he said he'd wait till the divorce was final before coming here. The divorce isn't because of him, it was already well on the way when I met him. We have spoken for just over 6 weeks. I had a couple of times felt something was wrong but pushed them to the back of my mind. He is under a different name on here, I have the same photo as Malescammers.com and also a few more. He tells me he is Italian and has lived in the USA for 12 years. He is supposedly an Engineer. Be wary ladies
REPORT N3 (added on June, 24, 2014)
Mishel (USA)
I have been talking to him since around the 1st of April. He just asked me for money so I got suspicious and started googling scammers. I found his picture and another guys I talk to. I was very upset because I was already scammed out of over 100,000. $ by someone else. He has told me he has a son 17 back in Alabama, while he is in Ghana. He said he is there to build a building for an American co. He also told me he had bought a piece of land and was digging for gold. He has asked me a number of times to pick up PC, phones and ship them to him but he pays for them and all shipping fees except once I had to pay 500 for the shipping I told him no more. He has to give me paperwork to ship.
Now he says he needs money to finish building because all the rain and bad workers made half the building fall in and wash away in flooding waters.
He has collected about a half ton of gold that he has put in storage there with a gold co. He wants me to be the receiver in America he had me write a email to them telling them the same. I haven't heard back from them yet.
I have sent 2000$ so far for materials. But I am not sending any more.
REPORT N4 (added on December, 21, 2015)
Patricia (USA)
He contacted me on Match and says he is the CEO of Harexs Equipment and sells all over the world...wants to get to know me so we can be married...

Romance scam letter(s) from David Hartman to Patricia (USA)
Hello Patty, How are you ?
It was nice talking to you on Match and I must say you sound interesting and would like to get to know you. Sorry it took me quite sometime to write you. I had a very busy day today and i got home early but took a nap and ended up sleeping in deep. To tell you a little bit more about myself, i have a dog Boozy is a Shih Tzu I prefer to have him around me to help keep me from being lonely as well.Though I love kids but since I was not bless with any,does not mean I should dislike them,if in any case my soul mate should have any,no problem and in any case she would love we adopt one,no problem as well. What matters to me now ,is finding the right one no matter where she is ,if on these planet or not,I must surely find someone who will just put smiles on my face ,someone I can give her my all and someone who can fit my locks. My word matters and people matter!