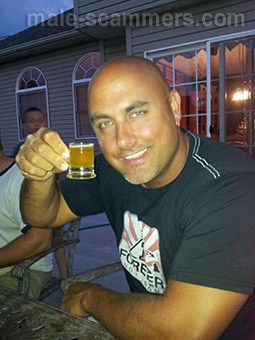 REPORT N1 (added on Mayy, 24, 2013)
Erin (Canada)
This scammer's English is quite bad so you know soon that his native language isn't English. Comes across quite polite but moves fast in telling you he loves you after the second or third email. He contacted me through Badoo saying he lives in Burnaby BC. Yet spelled Burnaby, Burnby, BC. A few days later said he had to go out of town and was in the UK. I saw him again on Zoosk stating he was in Beasconfield Uk. After the first encounter on Badoo I googled his name and came across a complaint of how he tried to scam a woman for money. She didn't have any photos of him but described him and they all matched the ones Ben has sent to me via email address and some on Bad and Zoo. I sent her copies and it was confirmed to be same person. I've sent a tracker on his email address and it shows that it either goes to Sunnyvale California or New York City, NY. Through the woman that described the photos I learned that he will say his nanny had an accident, brother needs money to get to where Ben's son is to look after him as Ben is still out of the country. After more than 10 emails and three messages left on gmail chat he finally asked me for $500.00 to borrow with promises to pay back plus interest tonight. Ben claims to be a widow, has one son named David, career as a Geologist. I have kept all emails and photos. Please let me know when I can send them through to do. Thanks.

Romance scam letter(s) from Benjamin McDonnald to Erin (Canada)
Hello sweetie..
How are you doing and am sure you had a lovely night?
Thanks for getting back to me from the dating site, I am Benjamin, I am a geologist i work with the mineral
resources management...

well, my name is Benjamin McDonald.. i have son who's name is David.. i am widower looking for serious relationship... someone i can trust and take as my future wife... i hope and believe you will be the right lady for me.. i love your cute smile and picture thats why i sent you a massage via the dating site and am sure you saw my son with me,. he's 8years old and a happy child.. i so much love him from the bottom of my heart.. i worked so hard to be successful in life and am still working for the better purpose in future.

i will attach some of my pictures to you so you can see it and let me know what you feel about... and pls kingly get back to me with some of your pictures so i can see you too..
i will be hoping to hear from you dear..
bye for now hugs an
Read more