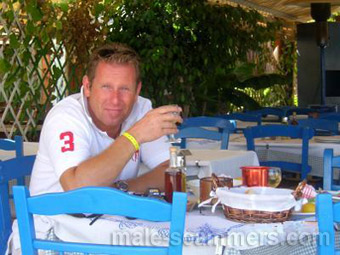 REPORT N1 (added on May, 14, 2013)
Claudia (USA)
This individual contacted me through match. He said he is John Morgan from Birmingham Al and a business man. In endless hours on yahoo and google talk he told me he has to go to a contract bidding to Benin, right before we were supposed to meet. So, of course he won the bidding, but didnt have enough money to pay the lawyer to sign the contract. Red Flags !!!! I was questioning over and over again, and doubting, but this one was unbelievable good !!! till I found out more and more lies. But for the money I sent to him it is already to late. I filed a claim with the IC3 The Internet Crime Complaint Center (IC3) is a partnership between the Federal Bureau of Investigation (FBI) and the National White Collar Crime Center NW3C. And I am going to report tomorrow to my local police department. He is still in contact with me through the whatsapp application on the phone his Benin number is supposedly +22966291363 and he used for the first contacts a Alabama number 2052165419. In the meantime I found out, this is a google voice number. I asked him several questions and at least he gave me some infos, of course faulty ones, but doesnt want to give specific information about himself. He is using a home adress and the name of this person what is not correct and victimizing therefore also the real person who lives there. I have send to him money per money gram 9 times, 3 times under his name and 6 times under the name of the supposedly hotel manager, Ramon Afuape, who is helping him to get the contract done there, cos he is the whole day to busy to pick the money. I couldnt find the Hotel in Cotonou on Google. But I found out the first email he sent to me was already from Benin Hotel Marina. So he never was in the States from the beginning. Last week he wanted me to wire some money to his daughter Alice Morgan to UK, she studys there in Oxford London and is in need of money, cos he cant right now not send her some, but didnt have her ID so he was asking to wire to a friend name Zuzana Bognar. Moneygram and WesternUnion denied both transactions after verification and detected this as scam. So I got the money back, but was stupid enough to wire it directly to him to Benin. He said he stay in a hotel Adjousse Hotel and Suites Lot 52 Haie Vive Cotonou,Benin for business purpose and would come back in the CW 16 around April 17th. I have of all conversations a record, through google talk, yahoo chat, and right now he is in contact with me through the whatsapp aplication on the cell phone. He uses a blackberry torch 9310 right now with the phone number provided earlier.
He also used in the beginning email adress morganj906@... and with google talk johncares4claudia@... and johncares4love@.... His daughter Alice Morgan used for chat and email alicemorgan53@... He also gave me her address in London and birth date May 17th 1993. Purley Way Crescent Croydon, London CR0 3JS. But there is no daughter, cos I found out he send the email I got from her by himself from Benin.

Romance scam letter(s) from John Morgen to Claudia (USA)
Hi Claudia,
How are you doing today...Well it's really my pleasure to get to have your email and having the privilege to composing this email about me for you...You see im new to this online dating, it's just of recent a friend of mine introduced me to this online dating because he found his true love on here and they are both happily married now...and i just decided to give it a try as well....and that was when i register to the site and luckily for me your profile happen to be the one that got me captivated and that's why i hit you up and im so glad to hear back from you...I think i have to tell you a lil about me my name is John Morgan, and i live in Birmingham Al..im a business man...i import and export heavy industrial machine all over the world and i do travel alot on business aspect...Im mixed race, My dad is German while my mom is from the state... I love going to the beach listening to music and playing volley ball....and to me distance does not matter to
Read more