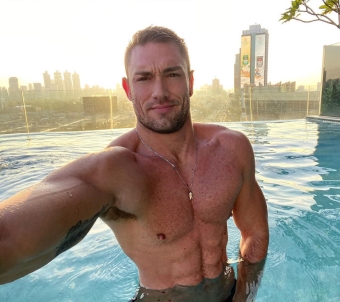 REPORT N1 (added on August, 20, 2020)
Wanderer (Canada)
I knew that man via Slowly - an app for people who like writing letter. After two letters, he introduced his email, then we exchanged email, after that he only texts on Hangouts. I started thinking he would be a male- scammer because he used regularly some statements, almost of his sweet words he texted I can find easily on the internet. He said he read a lot, then I asked him any news happening in the world, he replied with long paragraphs which I also have found out the original documents on the internet, too. With doubt, I searched some selfie photos he sent me, and they are stolen from a young guy names Ben Barkson - A Germany DJ. He told me his job is an oil merchant/ petrochemical engineer. I stop contacting with him but I discovered he still uses his hangouts account. I will post his letter later. Hopefully, he has not cheated many women.

Romance scam letter(s) from Jackson Kurr-Mann Jr to Wanderer (Canada)
My name is Jackson, I am interested to know more about you..lets try and exchange some words so that will can get to know each other. I only saw your profile, which made my interest to be anxious about knowing you. So don’t feel that i invaded your privacy without your consent, is just that i want us to be friends at your own discretion..

Hello Dear,
I am sincerely pleased to read from you. I want to say thank you from the bottom of my heart ️for your message. Like I told you, My name is Jackson Kurrman, an engineer, I am actually from Ottawa in Canada 🇨🇦, live in Salzburg, Austria. You know, the United States and Canada are similar in many ways. Both countries are in North America. Both stretch from the Atlantic to the Pacific Ocean. Both have natural resources, such as forests and rich soil. American Indians were the first people to live in both nations. European explorers came to both nations to start colonies. Great
Read more