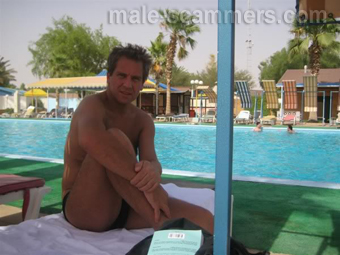 REPORT N1 (added on April, 18, 2013)
Diana (Croatia)
I met him through Facebook and after only six weeks he left on the buissnes trip to buy appliances. He is a widower with a daughter Lilly Lorenzo of 11 years, from London. Born in Rome, he had a difficult childhood, early lost his parents.
Currently located in Malaysia, Kuala Lumpur, and after the money he needed for shipping goods, Followed with problems of charges for transportation of heavy loads. After I sent him the money for all this, there's no pay for hotel bill, food and airline tickets to London. Before I sent the payment through Western Union always on the same address just different names... a hotel employee. He sent me a fake airline tickets, fake bank statements, fake slip of payments on my account.
His Facebook profile is locked and sends photos of a very charming man with a daughter through the mail. Webcam it does not work.
REPORT N2 (added on July, 31, 2013)
Carroll (USA)
Left message on my Facebook Messages. said he was browsing the wed and came across my profile and couldn't get over how angelic I was and said he was a widower with a daughter and was tired of being by himself. that he was shy and had trust issues with woman. said he was a vet. He asked me to give him my phone number I didn't at first. Then he sent me his number and I called it and we talked. Then he would tell me how much he loved me and how beautiful I was his woman. sweet talk me and send me notes on the private message and tell me how much he loved me. He was evasive about friending me on Facebook said he was to busy and didn't get on computer that much. This went on for about 6 weeks then he said his contract was up at his work and he had to go to Sadie Arabia for a couple of days then he came back to Florida. Then he had to go back to Sadie Arabia that was when he called me and said he had trouble all week. He had been trying to get a Flu Vaccine from Asia that cost 84,000 dollars and they wouldn't let him take the money out of his account and transfer it to Sadie Arbia. He said he had to barrow $20,000 from his Mom and another $10,000 from a friend but was still short $7,000 and want to barrow the money from me and I told him I didn't have it and he got mad and said I but a knife into his heart said he asked for help one time and I couldn't help . Told me to keep my money and said Bye.
REPORT N3 (added on March, 27, 2014)
Arlette (Switzerland)
He sent me a friend request at Facebook. We talk and phoned together from th 1st march until 22th march 2014.
10 days after the beginning of ours conversation, he told me he has to go for business to Nigeria, he had a big contract there. Few days later he called me to ask me for CHF 5'000.-- to help him because his bank in London bloqued his credit card. He needs this money for mobilization his workers on site.
receiver's name of the money: AZUKA IFEDIORA. I told him, I will not send any money to somebody I never seen. So the contact with him stopped immediately
REPORT N4 (added on May, 24, 2018)
Eloha (USA)
Scammer.

Romance scam letter(s) from Marco Lorenzo to Diana (Croatia)
I have an honest belief that life is what you make it, so never be shy about going after the things that matter to you. To be fair, this sometimes results in truly spectacular disasters, but as my mom always said, "the things that don't kill you make the best stores later." So, I've accumulated my share of good stories over the years, but I have no regrets. If you can't laugh at yourself then you need to do a reality check- we're all accidentally funny sometimes. As far as self-description goes, the things that come to mind are cheerful and persistent. I don't judge and I have a very open mind. I've discovered that I really like people- everyone has a story to tell and hearing them adds to the richness of life. Last but not least, I'm absurdly optimistic. A given situation may be dire, but I always believe that something better is just around the corner. My life has reached a really good place and I'd like to meet someone to share the journey. I value and intelligen
Read more

Romance scam letter(s) from Marco Lorenzo to Arlette (Switzerland)
Your image appears in my mind like a very caring and loving woman who has a sharp sense of humor and who hasn't got tired of life and believes that dreams come true.
So I decided to make my first step in our communication. I hope you understand, it is not an everyday thing for me to write to a stranger, but I just couldn't but get in touch with you. I’ve chosen you because your seem to be so special and unusual. Of course, I don't know you, but there is something that cathes my attention and makes me write you, you, such an amazing woman. So it remains only to wait for your reply and next to develop our relation in the most exciting and splendid atmosphere of mutual understand, please write me at brayngilberth@yahoo.com