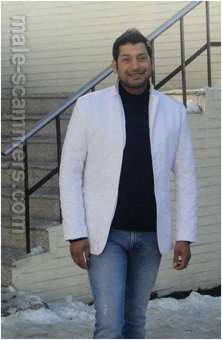 REPORT N1 (added on April, 17, 2013)
Bens (India)
This guy was previously operating on shaadi.
REPORT N2 (added on April, 18, 2013)
Natasha (India)
I met this guy on a matrimonial site jeevansathi. He liked my photos and immediately fell in love with me.
Claimed to like me the way i was. Sent me very emotional texts, emails and a lot of things. I am being cheated once always been careful so i tried to check his name, photos could not find him on any social networks, he also never asked for video chat, never sent his current photos. He totally got me emotionally involved by his charming talks and personality of a doctor who is rich and working in army had indian parent and wants to come to india and all bullshit. Somewher my sixth sense was telling me not to believe all that and then i searched with his phone no. and found this website where with the same phone no. similiar details only names were changed. I was very distrubed although i was not too much involved or gave any money i felt bad. I do not want others to suffer from this hence i am posting it here, i just hope he gets caught.
REPORT N3 (added on April, 26, 2013)
Shweta (India)
He is a paid member there. He wrote a personalised mail to my mom. Got in touch with her first. Expressing interest and tehn exchanged yahoo id ranjit_ajay@yahoo.co.uk> to chat.
We started interacting on chat from 20th March 2013. He said that he was getting relieved from his duties on Sunday, and taking the flight from Afghanistan on 14 April at 11:50p.m. to reach India on 15th April at 11:20 A.M. but on 15th April, a call came from Malaysian number +60102528834 and the person said that her was an officer from Kuala Lampur airport authority. He said that he got my number from Dr Ranjit who asked him to inform me, his wife (which I am not) about his detention due to carrying excess money not permitted by law of the country. The officer told that during interrogation, Ranjit had fainted and is in the hospital. He was really sick and I would be able to speak with him in 30 minutes. He called again after 40 minutes and made me speak with Ranjit, whose voice I recognised and he made himself sound really sick and scared. He then told me to follow officers instructions who is there to help him arrange necessary papers that would prove that is was not involved in money laundry or terrorist activities. The officer then called and asked to arrange for 2500 USD- 1000 for Ranjits treatment as he was not a citizen and 1500 for documents which would prove his innocence. He offered help by arranging two accounts in india, of his co-workers in Malaysia, where I could transfer equal amount and they would then release the amount. I requested the officer to send all details to my email id but he said that he can only text me as he was on duty. The following details were shared to transfer money:
1. To deposit USD 1500- ICICI BANK, MANISH CHAUDHARI, a/c: 120801500913, Pan No: AVPPC89050, IFS Code: 1c1c0001208, Chembur Naka
2. To deposit USD 1000 -HDFC: Joile Raleng, A/c : 22821930000243. Branch maligoan. Ifc code: hdfc0002282 pan no: bcwpr2590b
Once deposit is made, send receipt to mr. jerry_m@yahoo.com to confirm so that they can give Ranjit the equivalent currency there.
I had smelled the rat and went and consulted a lawyer friend of mine who helped connect the dots by making few enquiries and we discovered the modus operandi. It was then that we googled 'UK Military Dr Ranjit' and saw romancescams.com where we could see all the details posted to us by this imposter.
I was saved from getting scammed in the nick of time due to presence of mind and right time help from people who really were in position to help and control the situation. I hope this information helps and prevents other girls from falling into this guys and gangs trap. They have become smarter and using ladies as mother to convince the girl about their seriousness.
In addition to his chatting and sending romantic letters, he also shared his mother's mobile numbers and pictures.
I spoke with her 3-4 times and she was very polite, soft spoken, sounded old as per her age told to me about 67, sounded very excited about her son and myself getting married and called me her daughter. Very concerned about her son, saying that he is the only son she has and she is happy that he is meeting me soon. She said she will join us in india to meet my parents for marriage introduction.

Of course we need constant communication to understand each other better.so please kindly create yahoo id and add me for chat.this is my id ranjit_ajay@yahoo.co.uk
Regards,
Dr.Ranjit Aja

If writing to you can tell the special feelings i have for you,to tell you the treasure i have found in you...Then i have decided to write to you till we meet.If words alone can send this message that lives in me,the trust,love,even the sound beating of my heart rhythm with your name whenever your thought flashes my mind my body spartan follows the beating step ...

It is like a dream but my body has taken over my behavior this time,only because of your thought.what a crazy,childish strange feelings?though i could still remember that love acts like a kid.every thing is pure and clear,there's no secret to be hidden.

Should i call it a charm...It might be a spirit...But all i know is that i am feeling good.Nowadays,Love has b
Read more