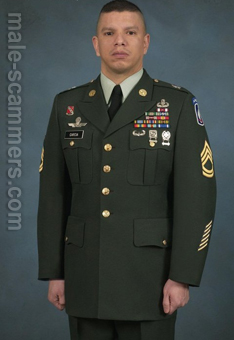 REPORT N1 (added on April, 12, 2013)
Susan (Australia)
1. Initial contact on match.
I was first contacted by the above via email on the match dating website.
His ID was johnready16.
There were five emails from him to me to my inbox at the website: March 27, March 28, March 29 and April 2, after which we started emailing between personal email accounts, off the website.
These messages on match.com are attached as jpg screen shots: 1st contacts on matchdotcom to 7th and final contacts on matchdotcom
2. Move to private emails
At my personal email account, I received emails on April 3, April 4, April 5 and the last on April 6.
To the first email on April 3, he attached three photos of “himself” in uniform.
3. Chatting on yahoo IM
During this time we also chatted via Yahoo Instant Messenger, to which he encouraged me to sign up, which I did on April 4. We chatted on April 4, April 5 and finally tonight, April 6. During a couple of these sessions, I agreed to let him “see me” via webcam. But he never let me see him, of course, claiming he was at work (“in camp” at an undisclosed Australian military base in Qld) and thus unable to do so.
During the chat session of April 4 at about 9.50pm, he uploaded/shared two photos of “himself” in civilian gear and three photos in US military uniform.
Up to this point, my internal “alarm bells” had rung on a number of occasions but John Garcia always had a plausible explanation and I started to ignore those bells and decided to share some of my photos with him during the next chat session. I guess I started to doubt myself …and trust him!
4. Declaration of love
Tonight, April 6 at 5.39pm during a chat session, he said he had sent me an email he had prepared and asked me to read it and tell him what I thought. Initially I was just worried because those alarm bells started ringing loud and clear again and I emaied my mum telling her John Garcia had just declared his undying love for me and I was alarmed because I had read all the warnings from dating websites about scammers included their “love” declarations very early on in the online friendship.
John Garcia and I resumed our chat session where I told him I was “overwhelmed” by his declarations and alarmed because I knew about the scammer warning.
5. GOTCHA! A scammer revealed!
But when I copied and pasted the “love letter” into Google, it came up with several links to scam letters… WORD FOR WORD. And I knew for certain John Garcia was not who he claimed to be.
I shot off an email to him immediately, telling him I was on to him and included the link to the scam letter website, asking him to please explain.
I closed down the open chat session, which we were due to resume after I had dinner…and after a while, I saw the message “were (sic) are you” appear in the chat window. I replied, “read your email”.
His response was to try to justify using the scammer “love letter”, saying it was just “research” to help him pen the appropriate words.
I made it clear, I was not buying it and I was on to him! I said “GOTCHA” and told him he was not who he claimed to be and his intentions were less than honourable and I went offline. He replied that if I was scared or had misinterpreted his actions/intentions (words to that effect) and no longer wanted to talk with him, he would understand and not contact me anymore.
Within minutes he went offline.
John Garcia never asked me for money or personal account details, so I assume his ruse was simply a way to feel powerful. But who knows, maybe if I hadn’t discovered his lie, it would have been a different story?
I hope you can use the attached photos and copies of chat sessions, emails and his match profile and somehow stop JOHN GARCIA from trying this on with another unsuspecting woman looking for friendship/love on the internet.
Thank you so much for your help! I’m just glad I “knew” him for only a week-and-ahalf!
As I am a newspaper journalist, I plan to share my story of John Garcia with my employer, APN News & Media, as a warning to other women.
Please, let me know a.s.a.p. if you would advise against this, for any reason.

Romance scam letter(s) from John Garcia to Susan (Australia)
Hello Susan,
Very nice picture of you and nice smile.Yes i am in the army and i have been there for 16years now just making arrangement for my retirement.i really would be very happy if you have yahoo messenger or get one and tell me the time you will be online so i can meet so we chat and get to know more about each other.i have attached pictures of me in my uniform i hope you like them.i hope to hear from you soon.take care.
John

Hello Babe,
I hope you will have a good time.Yes Babe i am with united states army but i am in Australia and have a house here.i thought i told you this if i did not i am sorry.I live in Mackay,eastern coast of Queensland.i hope to chat with you soon