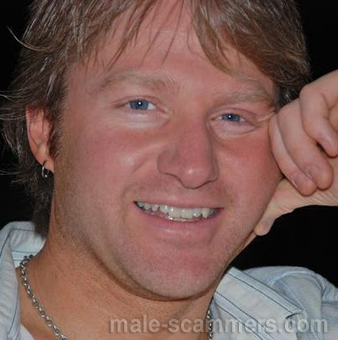 REPORT N1 (added on April, 2, 2013)
Barbara (USA)
He initiated contact with me on match and claimed he had just relocated to Virginia from the UK a month ago. claims to have a daughter who he calls Linda and is 17. He then went on to say he was in the process of opening a antique furniture store and was currently in South Africa buying furniture... although i am weary and aware of the many scammers out there I went along with his story just to see where it would lead. he proceeded to write letters claiming his love for me, but i kept asking him if we could meet because i don't believe in love over night. this went on for couple weeks, and i didn't hear from him for couple days...when i finally did he claimed he and his daughter had been robbed at gun point and thieves stole their passports and money and the furniture he claimed to have bought was in storage and the shipping bill had not yet been completed so they wouldn't let him have the furniture until paid.claimed his daughter was in the hospital and he suffered a broken arm. I ask him what i could do to help. he claims he needs to go to embassy to renew passports (300.00) each and by tickets to get out of there. I told him i wouldn't send money, instead wanted to bring it to him in person and kept asking what address he was at, but he wanted me to send western union..he gave me an address but i can only remember a part of it because he erased it in messenger somehow. something about pheltons motel on 77th street in Johannas south africa.

Romance scam letter(s) from Maurice Cavali to Barbara (USA)
Hi...i am Maurice,I went through your profile and i found you as a good woman that i would love to get to know better.I wish i am good in sweet talking,but i believe in being me and not pretending to be anyone else.
I tired sending you an IM message here but you didn't respond, if you are interested in talking you can reach me at

Hi Babara,
thanks for replying my email, is there a way we can talk outside match ?

Hi Good Morning,
I enjoyed talking to you yesterday and hope we talk more today....I am a honest man i love swimming,watching comedy movies listen to music and visiting beaches..i drink occasionally but i don't smoke.I am self employed ....I love to play field games,camping,Beach, movie, writing poetry and watch sporting games and a whole lot other things to keep me busy and don't get
Read more