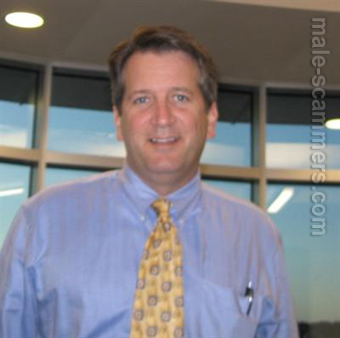 REPORT N1 (added on April, 2, 2013)
Jane (USA)
This guy claims to be a bank manager in possession of some account whose members are deceased and he wants me to help him transfer the money to another account, promising to give 50percent to me. He contacted me first though, and after about 1month of exchanging communication with him, I suspected it was all lies because i was just reluctant to heed to his request, until he pressed harder. Eventually he gave me instructions that I would need to be able to have the money transferred, even though I was hard on him. In the process as he claimed, I would be required to open an account and that would require me to send some money to him. But I found out it was all lies because the bank never exist. I told him never to contact me again and warned him off, otherwise I was to report him. Its 3weeks now and I never heard from him again. Oh, I pray someone else doesnt' fall victim to this man.
REPORT N2 (added on August, 8, 2013)
Cindy (USA)
He contacted me on Match and said he was ending his time @ Match as his daughter only got it for 1 month. He wanted me to contact him through his email. This was back in late April and we talked over the couse of 3 months. He claims to be a Fund Manager working with AGIP Investment firm International. Claimed that he was a widow for 10 years and his father and son died in a car accident. His mom living in Italy became very ill and he went to visit her and she died 2 days after he left Italy to finish up work in London. Had to go to Dubai on special assignment and then made this claim about putting me down as a investor in this AGIP company and selling shares that were put gift money of 11 million dollars in my name as he could not take money from clients (against company policy) ,.He drew me in saying it was all legal and I would only be helping him get the money back into the states,so he could start his own fund manager business.He had resigned from the company and wanted to go solo . He had me open up the account in Spain@ this private bank. Then made up Tax Certificates and Clean Report Certificates saying I had to wire money to the bank for them to release this money in the bank account. This was all happening at the end of May. In June, I had a good idea he was scamming me and tried to avoid his calls as I was on vacation out of state and tell him that I would not be able to help him. He kept pressuring me and made up a offical letter from the EU dept. of Treasury that said if I did not pay for the Clean Report Certificate that it would be assumed that the money in the bank was to supply the terrorist and I would be investigated by the authorities in the EU and U.S..I was running scared as his calls would be more pressure untill I finally said i will help you. So I sent him money as I had a specific timeline to get this done or it would cost me more. Well needless to say the deadlines kept moving and my wire transfer would not get there in time. He kept asking for more money each time and the stakes were higher and more ostacles to go through, he also claimed to have a friend that was supplying him part of the money. It was a real circus run-a -round that he had me doing . He got me for thousand of dollars....I finally went to my ex for help and got myself back into reality with his help, but it was too late for all the money I had lost in the process.
REPORT N3 (added on May, 27, 2014)
Lynn (USA)
He told me his subscription to Match was ending and requested to communicate thru his personal email. I was told that his daughter had signed him up. The 1st contact was on 1/16/14 and the last email that I received was on 5/14/14. Numerous excuses for not getting to meet each other. His mother passing, closing transactions as a Fund Manager, high blood pressure so in the hospital.

Romance scam letter(s) from Mark Davids to Cindy (USA)
Hello Cindy
Wow! Thank you! Thank you! Thank you for responding to my email again and request to contact me through my private email. I know it was an unusual for me to make such demand when you do not even know me. I am glad that you did because I would have totally lost contact with you as my subscription has expired and I can no longer access my Match.com account .That is by the way because I can still reach you via your private email. Once again thank you!

I hope you are having a nice day as mine has been a busy one as my office is relocating to a new building which is a permanent site. I have also been In and out of town over the past week because of some big investors that wanted to conclude their transaction which they started with me before I moved. Anyway, I have sorted my busy schedule out and now a bit free.

It seems I have been rambling without saying anything about me which was what I promised to do when you contact me on my private email. I am
Read more

Dear Valued Investor:
This is to inform you that our office has received the Draft Clearance Notification (DCN) from the Suisse Credit Union. This bank is our paying bank in Switzerland and Europe in general. The bank contacted us this morning saying that the draft is ready for payment to the Beneficiary investor. They issued us the Investors Online Offshore Checking Account Set-Up code (00V7CODE917) which we are to send to (You) the investor with which you are to communicate to the bank to enable them establish this account in your name. This code is to identify that you are an investor with Vanguard Investment International as the bank does not open an Online Offshore Account for anybody without verifying the customers’ source of fund.