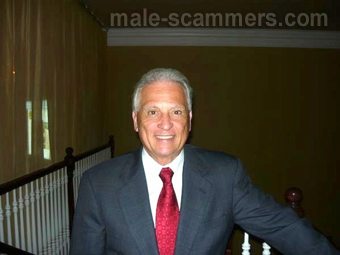 REPORT N1 (added on April, 1, 2013)
Cheryl (USA)
This person, Joe Moore, introduced himself to me on Match. He said he was working in Johannesburg on an orphanage and would be coming back to the state in 3 weeks. I met him on March 8th then by March 20th after lots of emails, texts and phone calls he asked me for $5000 because he ran out of money and needed to pay some final taxes. Reluctantly and stupidly I sent him the money because I believed him when he said he would come to Dallas before going home to Chicago so we could meet. Emotionally I was pulled into this man and his pictures. He sent me a copy of his KLM flight and I believed him. Then on March 26th, he canceled his flight because he said he had to pay taxes in the amount of $20,000. I did not send him the money. He then sent a copy of a counterfeit check written to him in the amount of $2.5 million to show me he was good for the $20 thousand dollars. I asked for more pictures so I knew it was him. The pictures I received were photoshopped and I have the original picture with a different man in the photo. I have all the paperwork from our correspondence including, pictures, receipts, photocopies, emails, etc.. I traced the IP address to Pretoria, South Africa. This person is using a phone number from Santa Rosa, California and has many aliases.