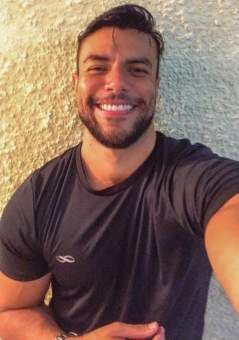 REPORT N1 (added on December, 19, 2019)
Princess (Canada)
He lives in Detroit Michigan USA, as a Humanitarian Journalist. He is single, never married with no children He stole pictures off a Brazilian man who lives in Governador Valadares, Minas Gerais Brazil.
REPORT N2 (added on October, 27, 2021)
Allena (Spain)
He chatted me up on Interpals site. We've chatted for a month on Whatsapp. The guy is in your base under the name Steven Robinson. I met him on Interpals, he says he is a humanitarian journalist working in a IDP camp in Gaza Strip, his contract is due to finish soon. Not married, parents dead (as he is saying), asks for money to help him get his prescious stones out of Dubai (the stones are to be inherited after his dead dad). At first it was a normal talk but after a week or so he was deeply in love with me. He called me once, I saw him on cam and that made me believe but Im guessing the video was fake, lasted for 2 mins or so and of poor quality. After that time I asked him to vid and his excuse was that he had huge problems after calling me and it was forbidden. Everything was too perfect, he wanted to come to my country and start life with me. And after a month he started asking for money, at first it was 11250 dollars to help him transfer his stones to a safe place. I didn't agree so the sum dropped to 2500 dollars and after that to 500 dollars. I didn't send it and he disappeared.