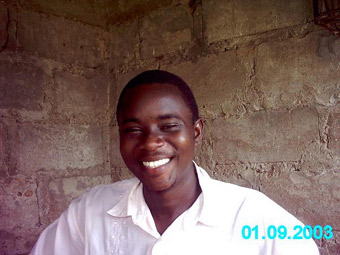 REPORT N1 (added on September, 7, 2011)
Carlo (Italy)
Following the request by the Mintah Nana, born in Chita (Russia) IL 05.09.1978 and now in Ghana where he has served as a nurse training and was reported as an address: PO BOX SM90 AGON SWEDRU GHANA WEST AFRICA. Before Miss asked me to come to the aid and help in the Italy trip and I sent 250 euros for the remaining sum to cover the cost of U.S. $ 569 checks were then travel for 3000 Euro check required by Immigration, then still being called Euro 1500 for airport fees and medical examinations for entry into Italy. Subsequently, the immigration office to call me and tell me via e-mail noted that other Euro 5500 as Nana Mintah had with him a load of 22kg of gold bars and that sum was used for the transport insurance. Then request for money to pay for the security that had guarded the values and the immigration office even asked me 2000 Euro and then the payment of your stay at the hotel at the airport close to Euro 1150, for a total of Euro 13,304 + commission Euro 542.25. Subsequently told that I was arrested by police in Ghana to escape because he had not paid taxes on gold, which brought abroad and say that for free it has to pay Euro 12,500 by Wednesday, 6 May 2009.
Later I was still more money was requested May 28 2009 Euro 1800 and 01. June 2009 even 800 dollars, 03 June 2009 I was asked to send to Mr Justice Mark Oduro reported from the Accra office of the GHANA CUSTOMS AND PREVENTIVE UNIT Accra for the payment of fees relating to the Euro 3990 first 04th June 2009 and 1010 more 08th June 2009 more Euro 4000 for a total of more Euro 9000 + Euro 200 June 16 2009 and another 200 Euro June 27 2009 + transfer all commissions sent to Mr Justice Mark Oduro Accra THE ADDRESS: JUSTICE MARK ODURO, C / O CESP, POBOX DC331, DANSOMAN, ACCRA, GHANA. Afterwards I was still required to send to Mr. Paul Putin that work in the immigrant export departments at Headquarters Accra first Euro 2500 June 29 2009 and then again on 06 July 2009 for the payment of the declaration of origin of gold in order to ensure the release from customs dell''areoporto London Heathrow and after the sale, I have a declaration of Miss Nana Mintah who undertakes to repay the money received by a loan July 10 2009 plus 5% from the date of the amounts withdrawn until 10 July 2009 day when the refund was done for a total of Euro 31,538.62 demonstrable through all the receipts of payments made through Western Union and Money Gram. It has:
Copy of passport of the Russian Nana Mintah and other photos of the same, Proof of gold deposited at the Gold Coast Security Company in Accra of gold by the Signorinma + Nana Mintah other documents indicated as Contract where Bond is reported that the value of deposit is ? 250,000, 00
Ricecvuta payment of Euro 5500.00 for insurance over 22 kg of gold (gold box) by Magnum Security and Insurance Trust in Accra - Travel Euro 3000 check of Barclays Bank headed to Nana Mintah of 28,04,2009. In addition to all receipts of payments made, it has all the talks occurred via yahoo messenger with Nana Mintah, Immigration Office in Ghana, Ghana Customs and Preventive Unit in Accra and talks with Paul Putin of immigrant export departments at Headquarters of Accra , letter of ''Immigration Office in Ghana, in addition to the statement of Miss Nana Mintah stating that a debtor with a promise to pay off the debt on 10 July 2009. operation that is not Avvenu. I thank all those who can help me in recovering my money and all those who can verify the correctness of the documentation issued to me.
Thanks and best regards,