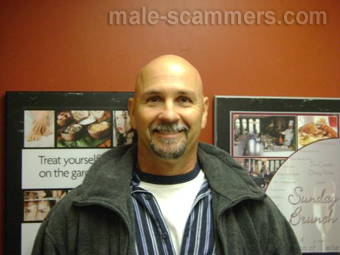 REPORT N1 (added on March, 21, 2013)
Lisa (USA)
I met this Guy on Christian Mingle two weeks ago posing as a independent Oil contractor he has a web site that to the naked eye is quite Impressive he poses as a life long Christian widow says his wife Tonya passed away 4 years ago. says he has a 16 year old son that is in China with his sister Susan who is a missionary.in China.he says that he has 2 months left on his supposed UK drilling site and that the next one is in TX. I had odd activity going on with my e-mail that put up a red flag with me.yesterday my daughter in law is a PI she did some digging last eve she found that the pic in the web site is photo shopped as are the others if he send you a pic with him by a red white and blue Helicopter its photo shopped he is quite charming Bald blue eyes groomed mustache gote salt and pepper says all the right words she found the Real George Morgan whom is in the Oil business and is contacting him today to enlighten him on his identity being used by this thief..he did not get $$ from me I sent word to CM last eve and received word back that CM has shut him down on there site removed him sad thing is he will create a new name and Identity and start this process over he also says he is from Austria and has a very heavy Austrian accent is a bit hard to understand on the phone God will truly deal with this person who ever he is in his own time in his won way.
REPORT N2 (added on September, 29, 2014)
Jackie (Canada)
I met this person on Christian Mingle (CM) - he calls himself James Carothers age 56 widower with 2 children - have emails and photos of him from CM - he asked me to email him at private email and then sent long email saying was Independent Drilling Contractor. The English was broken and sentence structure was poor - I entered a line from the email and it connected to someone already on your site - George Morgan.

Thanks a lot for giving me your email address on that Christian mingle site.It's very convenient for me to read my emails here.
Well let me tell you some about me.....and i expect in your next email you tell me some more about you LOL it's so interesting to knowing some one this way some one you have never met before it gives me huge excitement.

A little more about me. My parents were the best ever. I have always been kinda reserved. I was not a wild person growing up and still isn't. I gave my life to Christ in when i was 20 has never turned back since then. I was married for 19 years until the good Lord had to call her home after fighting cancer for 18months , we had a wonderful son together thought we had it late in the marriage. My son is a blessing from God to me.

I believe every one has more than one soul mate in their life time that 's truly spiritually,physically, assigned and destined to them by God, If you loved them until death took th
Read more