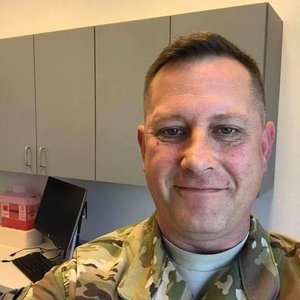 REPORT N1 (added on July, 10, 2019)
Eloha (USA)
Military scammer.
REPORT N2 (added on August, 5, 2019)
Kathryn (USA)
I met Senior Sergeant Paul Otano on Mingle2 on June 18, 2019. He agreed to buy my Lenovo Yoga 700 laptop in its original box that I had listed for $400 on Facebook Marketplace. He said it would be perfect for his son who lived in Minnesota. He insisted on paying $500 to cover shipping costs. He sent me his location in Dublin, California where he said he was a Recruiter/Instructor for the US Army. He said he would put the money directly into my bank account. He did not. I then received an e-mail from PayPal business saying he had deposited $500 and if they received notice the the item was shipped the funds would be released. I shopped the laptop via US post (have receipt) to his uncle's wife, Sandra Stevens, 43 6th Street SW, Eyota, MN 55934. The money was never released to my PayPal. Paul said he would speak to his bank, he would deliver the money the following Monday. He then e-mailed me that his son did not like the laptop so it would be mailed back to me. It was not. He blocked me on Google Hangouts.
REPORT N3 (added on February, 8, 2021)
Lena (Sweden)
was contacted by him via FB.
Started the conversation as many others do, saw & liked your profile. Looking for a friend when yours showed up. ETC Continued to talk to him to see if he was a scammer or not and if it would turn out he was, be able to report him here.
He quickly began to tell that he was a widower with a 14-year-old son, his wife had been run over to death in a car park by a reversing car. The son went to boarding school. He would retire as soon as he had finished his assignment. After just a week he wonted to marrie me, he loved me and soo on. He also happened to write in Yourba which is the most common language in Nigeria, but claimed that it was a mistake and that he hated black people He had about $ 3 million in cash in a box at an Australian security company under the auspices of the Australian state.
He wanted me to send $ 1,000 to redeem his box, even take cash out of the box to buy a big new house and start a coffee shop.

Romance scam letter(s) from Armstrong Christopher Link to Eloha (USA)
Hello beautiful,You look nice and charming on your profile picture, It is my pleasure to contact you after viewing your profile, and I would appreciate to know you more, hope you don't mind.