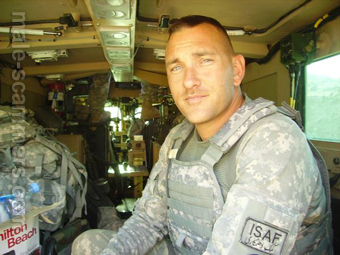 REPORT N1 (added on March, 6, 2013)
Linda (Canada)
I was approached by this man on facebook making a friend request. I originally thought I knew the last name from school, but when I viewed his profile, I noticed he was in the military. I added him thinking I would pray for him and that he'd made a mistake trying to add me. He then began to message me, saying that he was a widower, that his wife died 5 years earlier due to lung cancer. His father had married a woman from Malaysia and she was taking care of his young son Kelvin while he was deployed in Afghanistan. He was wanting to retire from the military life after 17 years and make a home for his poor son. He stated that his mother Brooke was a cook in Nigeria because her work had taken her there. He moved very quickly with expressions of love and proposals of marriage. I asked again how he had found me on facebook and he put the exact same answer he had the first time, which was odd, like he'd cut and pasted it. I cut and pasted it into yahoo and a scammer's site came up with the exact wording. Also the whole story about his being a widower, only leaving behind a young daughter. Mother's name was Brooke as well. He had asked me to write his mother because she wanted to meet me so I have included her email above as well, but highly doubt now that there is a mother. When I confronted him on what I'd found, he claimed he didn't know what I was talking about. He was quick to delete me as a friend on facebook. These interactions were over a period of three days.

Romance scam letter(s) from James Underwood to Linda (Canada)
Hello how are you?

Am doing great
Are you single??

How long have you been single?

You look so beautiful.I am single man with a baby boy.......I am originally from Houston TX but currently in Afghan Kabul in duty...
What do you do for fun do you live alone?

Yea i miss him ....what your own definition of true love?