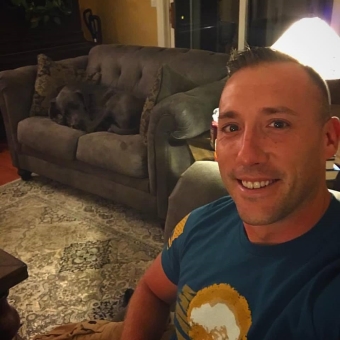 REPORT N1 (added on May, 30, 2019)
Nikolina (Bulgaria)
Larry Breton is representing himself as a US military, sent to a mission in different locations. We met on Tinder, he claimed to be in Bulgaria that time for an year and a half. We were writing to each other first on tinder then on viber. He maintained the illusion that we were going to meet for almost a month. Then he was suddenly selected for a promotion, sent to the USA, then rejected for the promotion and sent to Syria for eight weeks. After couple of days we requested EUR 1,400 for a secured internet connection, because he will be without radio coverage. I told him that I will never transfer any money unless I see his face in front of me. I insisted on a video chat, first attempt was totally unsuccessful, during the second one the screen was black and I heard a men with a strong African accent.

Romance scam letter(s) from Larry Breton to Nikolina (Bulgaria)
Hello Nikolina... Been texting you but it's not delivering, what's going on? If you want to stop texting me just tell it to me instead of ignoring me... I want to believe you didn't block my number and if there's something wrong then just tell me and let's settle it
What do you want from me, Larry? Be fair.

The worth of this contract is 150000 dollars
In which I have been paid 30% of it
But for security reasons we have been directed not to have access to our credit cards, debit or any personal belongings. So as to prevent any unforeseen occurrence by this terrorists babe
Immediately after the 8th week of this mission I will be paid the remaining 70% of tbe contract
And babe that's all