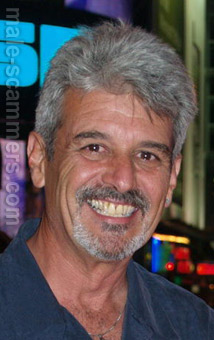 REPORT N1 (added on February, 21, 2013)
Eliane (South Africa)
I was contacted via Senior Dating Group SA on 21 May 2012 by a Antonio Benito a 58 year old male Italian by birth,an only child, an Engineer with his own business in Cape Town, parents both deceased widowed, his wife died of cancer 5 years ago with 2 grown children Chris and Sandra. He owns a home in Cebtury City in Capw Town, an appartment in Pretoria and one in Venice where his children where studing. Antonio had to leave on a contract to Madrid Spain on a building project amd contacted me via text message from Spain when he arrived there, he comunicated with me on and off by phone or text message on whatsapp and emails as according to him he had network problem. He was mugged and all his money and credit card was stolen, he was then taken to hospital wnere he asked me to help him with airtime. As this is and waas the last time I will ever go on a dating site ever, i was not aware of these kind od scams and through our comunication over the past months i had been asked to send money for various reasons and I had no reason to doubt this gentleman, the first time was South African Rand 8000.00 then SA R35000.00 which was stransferred to his housekeepers account at Standard Bank in Cape Town and she would then send it on to him via Western Union,he kept in contact with me when he could as the network was very bad, he also had a lot of problems at the building site such as crane breaking down and unending problems that kept him from coming back to South Africa. I know now that I was a victum of a scammer.

It's nice reading from you and getting your email, A break down of my personalty are as follow... I'm Antonio Benito, White Caucasian an Italian, Mum is from KZN while my dad happens to be a Italian. I studied Engineering in University College Cork (UCC) where i obtained a graduate Degree in first class. I own an apartment in Pretoria a place called Zambezi and i own a house in Cape Town Century city,I have two 2 kids and there names are Chris and Sandra. I lost my wife 5yrs ago she died of cancer, It came to me as a shocking news to me when i heard she was dead cause then i was in Itay. I had found it hard to love again and decided to remain alone because honest and truthful women are hard to find in this time of our global village but prayed seriously about it and i heard God telling me that another flesh of flesh, bone of my bones is out there waiting for me.

I need my woman to be God-fearing, caring, understanding, emotional, affectionate,ro
Read more