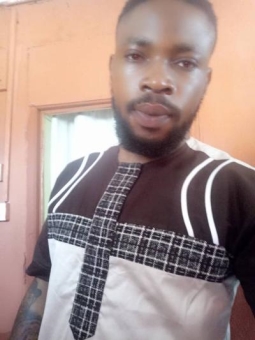 REPORT N1 (added on February, 27, 2019)
Mary (USA)
I met the person on Social Media Facebook and I have known him for 2 years and he I have given him 700 dollars and he has demanded I do transactions for him or else and and he has threaten me and me now he is asking me for 600 dollars to go Nigeria and get his passport and then he asked me for 7000 dollars and he sent me a copy of his passport which I thought was real to bring him over to the United States and he wanted me to come over there to and bring him back to the United States on that passport.
But I believe he was going to do harm to me because he asking and getting mad when I said I couldn;t come down there and he demanded . He would get furious. But he had me transfer large sums of money. I need help because I been a victim of a internet romance and money scam and I feel he is not going to leave me alone.
REPORT N2 (added on May, 6, 2019)
Dobby (USA)
When I saw Report No. 1 sent in by Mary and posted on Feb. 27 of this year for William Stephen, I saw stars! The avatar is for a Stephen W. Wilson (@stephen_wwilson) that a friend and I have been talking to on Twitter off and on since December 2018. He gave another Twitter account of his (@stephen92557876) which has been suspended. He also said he was going to deactivate the Stephen W. Wilson account, but he did not.
Stephen said he was from Lagos, Nigeria, was in his fourth year at a college in Benin and was studying political science. His tuition was $50. That would probably be for each 3-month period, judging by what I've learned from a friend in Ekiti State University (who is not a scammer). Wilson apologized for lying to us.
We went to Google Hangout. I wanted to get a screenshot of his face in a video, to compare it with the avatar. He swore to God that he had not scammed anyone. That was in December 2018. Mary said in her report she had been talking to him for two years on Facebook. He had tried to scam me as Gen. Stephen W. Wilson, but he sent a picture of himself, the same picture for William Stephen.