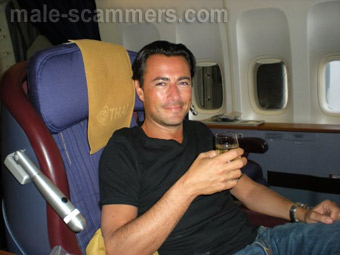 REPORT N1 (added on February, 19, 2013)
Jaena (Italy)
We met in facebook,he contacted me first,saying he's in Nigeria with his personal assistant to accomplish a contract till lats September 2012 but he was robbed 75,000euro and needed to return to Germany to get all the money to use to pay his laborer.He asked me to help pay his plane ticket then to pay me back,i did, but unfortunately he needed to pay a tax called ICAO to exit in the airport of Nigeria which amounted to 3700 euro which I failed to give but I helped also his food to survive while waiting somebody to help him out in Nigera.He just contacted me in chat a week ago and saying he's already in Germany and willing to pay me .But till now nothing yet.We chatted today,he said his secretary has no time to send the payment to me but will do soon as soon as possible,but really i dont believe him anymore,and i know he's a scammer.I will send you his pics and plane ticket receipt also his passport copt.Thanks for your kind consideration.
REPORT N2 (added on May, 27, 2014)
Lisa (USA)
Contacted me and we chatted for several days. Said he lived in Phoenix and has a home in Germany, but was in Florida at a contract job for three more months. I sent him an email to which he responded. The time stamp on the message I sent was 9 hours difference. There is no where in the US that is 9 hours from where I am. I had doubts as to if he was for real from the start. Asked for some sort of verification that he never provided.

Romance scam letter(s) from Michael Dennis to Jaena (Italy)
my love am so confuse and worried now and i have been crying since morning... honey you wont believe i went to the airport and they ask me for ICAO ( INTERNATIONAL CIVIL AVIATION ORGANIZATION ) they told me it a tax that am surpose to be with and which is refundable. They will not collect it from me it will only be tendered at the airport to show proof that i have some money with me for survival because most african go abroad to live a wayward life without money honey that what they told me. Please my love the money is 3700 euro .Its just money that must be with me honey i have been arguing with them since morning and they are transfering me from one place to another honey i am so confussed now i am so unhappy my love i dont know what to do...