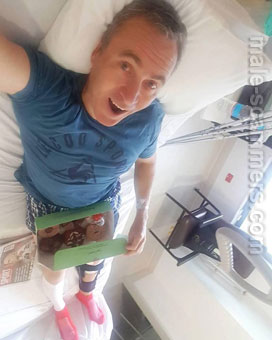 REPORT N1 (added on November, 29, 2018)
Dobby (USA)
This guy is smart. He would not give me his email address, saying he'd opened his Twitter account using his general's cellphone. I told him he had to have an email account in order to have a Twitter account, but I didn't argue the point too much. It will be plain to see why I asked for it.
Williams is from the USA, New York City. He is a Major General in the US Army. He's also a Major. He has a daughter in college. I was talking to him on two different accounts. He told Mary Ellen (one of the accounts) that his daughter, Lisa, is 17, in her final year of college, and studying pharmacy. The other account, he told Darlene, that his daughter, age 18, is in her final year at college and is studying nephrology, diseases of the kidneys. As I was writing this report, I saw that he had given the account for Mary Ellen his email address. It is johnclayton@gmail.com. I just finished turning in a report on John Clayton, and his email address is johnclaytonalo@gmail.com. No wonder Williams didn't want to give Darlene his email address! John Clayton had also talked to Darlene, but not to Mary Ellen!
Williams, as I called him, was on an undercover mission in Kabul, Afghanistan. He fell in love right off the bat, and I had to fall in love, too, because that the way it works. We talked for maybe a week or two, and then he was to go on a 'deadly mission' against the Taliban. He said I would not her from him for a couple of days. When he returned, he had been shot in the leg and was in some sort of clinic. He and his men had discovered a hideout of the Taliban with a lot of ammunition and cash. He turned the money in, and his general divided up the money they had found. Williams received $1.3 million. He wanted to know, since we would be married when he returned home, if I would keep it for him. He had wrapped the $100 bills into stacks of $10,000 each, just as the bank does, and packaged them for shipping. He gave the package to the Red Cross man, who delivers medical supplies, to ship for him. He got my name, address, my occupation, city, state, country, and email address (NONE of which was true except for the email address). I received an email from Fastlink courier services advising me that they have a package to deliver to me. Williams asked me to forward the email to him or send him a screenshot. I asked for his email. He said he did not have an email address. Another email from the courier said that the package had been put in Dr. Thompson's name for delivery and there would be a cost of 6999 (South Africa) Rand, or $7,906.688 in US dollars. I told them to deliver the package to the City Manager of Raleigh at the Raleigh, NC Police Department/City Hall Complex at 222 Hargett St., Suite 224, in Raleigh. We were the City Attorney and they knew me there. They would sign for Dr. Thompson. They were not happy at all to read that. Williams told me to go ahead and pay them. I told him I would do as he asked and that I would write them asking to whom and where to send the money. I did research the courier service and decided it, too, was fake. I reported that website to the Federal Trade Commission and gave them my email address and password so they could read the emails for themselves. And I made screenshots of the emails and pasted them at the end of the conversation with Williams so they could finally see for themselves that Gen Williams ken is a scammer. Then I reported the conversation to Twitter.