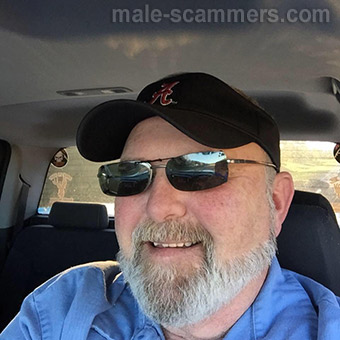 REPORT N1 (added on September, 21, 2018)
Dotti (USA)
He has claimed to be in an oil rig in the Pacific. Off the coast of Africa. On a 6.2 million dollar contract. Has a teenage daughter and custody of orphaned grandsons. Sometimes he says twin granddaughters. Needs money to support kids at home. Daughter with nanny. Other children with his sister. Declares undying love. Have connected with others that he has scammed out of money. I was in hospital and he was asking me to make a loan to send to his kids. He has multiple profiles under this name and others. He wears a hat that says Cowboy. Also coveralls with name Island Offshore which is a Louisiana based company. Cannot find any information in Texas in him. Suspect he is in Nigeria and profile is fake.
REPORT N2 (added on September, 25, 2018)
Sarah (USA)
He goes by JeffWilliams749 same picture as the one listed on this site. Multiple facebook pages. Reported on this site as Travis Giddens and Fredrick Williams.
One facebook profile says he studied at University of North Texas Honors. Another says University of Paris, France. Both profiles say he works on an oil platform. Same pictures as the one reported here.
REPORT N3 (added on July, 5, 2019)
Alica (USA)
He matched me on Tinder. In the beginning he sounded a bit different than the rest, but after 3 days he started to confess his love.
He made the big error to call me and he sounded nothing like a 57 year old man from Alabama, far more than a 25 for sure black man.
He is on Tinder with some photos which weren't available, but than he sent the one with the blue shirt, which I found promptly here.