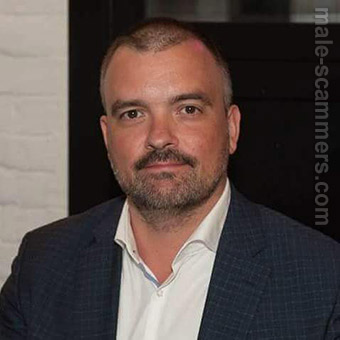 REPORT N1 (added on September, 17, 2018)
Monnicci (England)
I met Eric Andreas on mingle dating site on 24 July 2018. It was my idea to talk further on WhatsApp after couple days as it all seemed real. I now believe this man has a cloned identity as has two FB pages.. He said he was from Oslo and into gold trading. I was told his wife died 7 years ago giving birth to their daughter. He also has two boys age 9 and 10. We shared pictures of our kids and he was in some of these pictures himself. His other pictures are from random ages on dating site and also FB. His kids mostly stayed with a nanny. He Travel a lot for business to countries doing gold tradings. He groomed me for a month with instant love, promises of making me his wife. Calling me names like babies, honey, dear, angel, my queen, Princess... Tried to get intimate photos but luckily I didn't. He went on a business trips to Singapore/Malaysia which he told me off early in our relationship on 28 August. He had a crisis there days after he arrived. He Asked me to wire money via MoneyGram or Western union for a shipment of gold that was unplanned from Thailand. I wired ?500 first time. It was not enough and he asked again for ?500 to complete the shipment. He was to visit me after trip and made me feel whole transaction was gonna fall through without my help. He told me had invested everything in this last deal. Also borrowed money from bank, as he wanted a calmer lifestyle for us and our kids. Off course I did see all the warnings signs but felt trapped in his love.. He asked hours before his flight to me, to send him ?1000 as he encountered yet another crisis at border for shipping goods and needed to pay this money for a proof of tax document for the goods as it was send from Thailand. He phoned and txt me day and night...telling me he was stuck on border and couldn't leave without these papers and monies. He had no money for food, hotel, got a cold and his kids was missing him...He promised that it was only a loan and would pay me back as soon as the goods got delivered in Oslo. He asked me for my bank details, which I gave... He also showed me pictures of flight details all the time. I was convinced that he was the real deal. He kept on pressuring me for this money, even when i told him I didn't have it. He asked me to use my university money as he would give it back before my registration. I got emotionally over whelmed and just blocked him on all my social networks.We mostly used WhatsApp for txt and calling. He strangely had a UK number for these but also had a Malaysia number he calls me from. Also all the pictures he send on demand was mostly in the dark.. and didn't look like original pictures of him at all.. but with some resemblance.