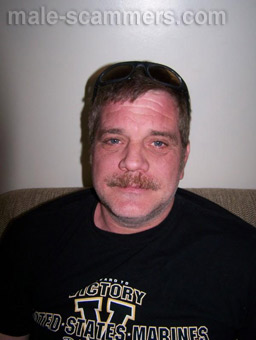 REPORT N1 (added on February, 7, 2013)
Suzanne (USA)
I met this man on OKCupid in late Sept 2012. We talked on that site and switched to email on 10/1/12. We exchanged phone numbers and texted, used IM on yahoo and emailed until Christmastime.
Everything appeared fine. I questioned his interest in someone across the country and he said he did not care, he'd relocate if it worked out. He claimed to be from Spain, have a mom in Madrid, a sister in Egypt, who was married with 3 children. He went out to see on an oil ship in November. Originally for 6 months, but then he claimed he'd be home for Christmas and New Years. Just before Christmas, he claimed his Mom fell and had a severe head injury. She had been taken from her home in Madrid to Newcastle England. This is where things got funny and I started to question him. I asked many questions about her condition. He began to ask for $$ to assist with bringing a specialist from India to perform a lifesaving brain operation. I asked him for medical info and he sent me a letter from her supposed doctor. It was completely erroneous. The hospital and address do not exist in Newcastle and intact Newcastle was spelled in 2 words (wrong spelling). The medical terms were misspelled, etc. I let him know that I did not believe him. That being someone in the medical field, there is no way an elderly woman could survive what this letter explains. It also did not make sense that they had performed life saving surgery but wanted payment for the final one before they would do it. I questioned the Hippocratic oath ! I offered to talk to the doctors for him since he was out to sea. He said they would not talk to me. I offered to wire $$ from his accounts if he was having difficulty accessing his money from sea. No response to that. I told him I did not trust his story and would not send money.
After a bit, he said that they started the process of helping her and she was doing much better. He sent a picture of a woman in a hospital bed, that in NO WAY had gone through what this medical letter described. I told him that and said good bye.
I only hope by reporting him, that no one else gets taken.