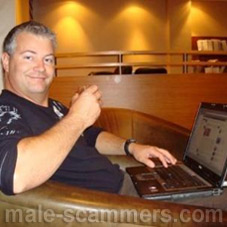 REPORT N1 (added on February, 7, 2013)
Susan (USA)
Contact was initiated through the internet as a friend request on Facebook.
It started late August 2012 and is still going on.
He asked to send him money to help him complete his business but I repeatedly told him I did not have the kind of money he was requesting and he seemed ok with that.
To fulfill a oil contract that he was having difficulties finding investors. I never sent money at this time. I first time I sent him money it was $500.00 for living expenses.
The first time I sent money it was sent through western union money transfer to Stanley Ikechukwu but was requested by Roy Gilbert on October 12, 2012, then on 11/15/2012 - $2,500.00, 11/27/2012 - $1,000.00, 12/03/2012 - $1,500.00, 12/14/2012 - $500.00, 01/02/2013 - $200.00, and 01/16/2013 - $16,700.00 money was sent via bank wire transfer to Ikewe Tessy Azolim but still requested by Roy Gilbert.
We were suppose to meet each other in Albany, Georgia on January 20, 2013 where he was suppose to complete his business transaction, I flew from Minnesota to Atlanta to Albany, he was flying from Kuala Lumpur Malaysia to Albany via Detroit-Atlanta-Albany, by the time I arrived in Atlanta I checked my cell phone messages, and found some text messages from him that he had been detained in Detroit that he was trashing his documents but would be with me soon and was being held for expired petroleum dealer license. I arrived in Albany found a hotel and was there for 3 days he never showed up, but called several times he told me he needed $48,000.00 to renew his license, but the buyer by the name of George Samuels was paying $43,000.00 and wanted me to pay $5,000.00, and if he was not able to get the money he was being sent to jail in Thailand. He gave me the name and phone number of his attorney in Malaysia to contact, requesting that I send $16,000.00 to the attorney so he could get his dealer license in Malaysia and could sell his crude oil there. On January 24, 2013 I returned to Minnesota. I contacted his attorney Barrister Cheng Woo and requested that he provide me with a copy of Roy's passport, and documents supporting his reasons for detainment as well as a photo of Roy holding the currently daily news paper with a visible date on the newspaper, and he declined my request advising attorney/client privacy, In a phone conversation with Roy he told me he advised his attorney to release this information to me but still his attorney would not do it. I have multiple phone numbers that I have been contact through, and as of 01/29/2013 still receive text messages from the attorney, and calls from Roy. I even received an email message on 01/28/2013 from the attorney where the money should be sent.

Romance scam letter(s) from Roy Gilbert to Susan (USA)
Good Morning Miss Susan, below is the account informations that you neet for the wiring transfer.

Best Regard
Barrister Cheng Woo. I last spoke with Roy on 01/29/2013 when he called at 2:32 in the morning. When he called to tell me that the attorney said I was sending the money and that soon he would be here with me. The call I received for Roy this morning came from a Phone number with and area code in Mississippi.